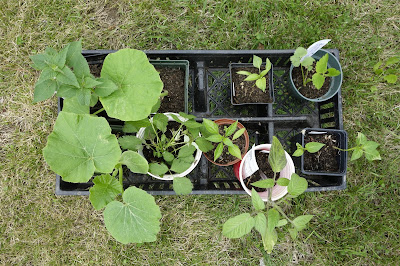 Oh my gosh, as if I don't already have enough plants that I've started on my own from seed but I've gone out and bought some more this morning.  But I knew I would.  I discovered Yuko Horiuchi and her annual plant sale a few years ago through a google search (probably something about "local plant sale" - in this case, "local" refers to her home in Carleton Place, Ontario).

Yuko is a super sweet Japanese gardener - the only reason I mention her ethnicity is for the interesting plants she sells (or how she describes them - she labels the malabar spinach plants "tsurumurasaki").  And she has a number of common heirloom plants, but also a number of Asian varieties (e.g. cucumber varieties include Kyoto Yard Long, Takiwa, Sagami Hanjiro).  Although I am a fan of some Asian greens, I can't say I like some other Asian veggies much - bittermelon ... yech!

I go mainly to purchase seedlings, but I also enjoy watching her enthusiasm in talking about plants and speaking with the customers - especially new gardeners.  While I was there I overheard a young man, with his equally young family in tow, mention he wanted to grow hops ... next thing, she was over in the side yard with a shovel digging up some hops for them.  I didn't mention that she is elderly and slight, but clearly gardening has kept her strong!

I found two varieties of peppers that I wanted to try as well as one I'd never heard of.  Her yard is small, and I actually found them under the porch and not yet labelled with the price.  They are a bit weak looking and were obviously not ready for sale but she gave me these 3 containers (4 plants) to me for $2.  They include 1 Jimmy Nardello, 2 Kings of the North and the one I hadn't heard about ... Hinkelhatz (which I'll get into further detail about in an upcoming post). 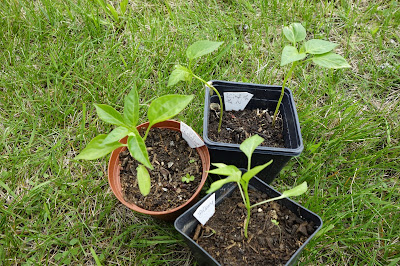 Although I have more tomatoes than I need (over 30 at last count), I bought a Japanese Black Trifele Tomato plant.  It's supposed to be dark coloured and pear shaped. 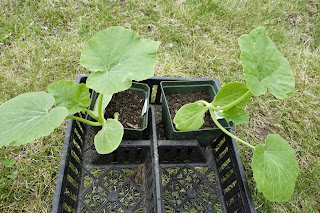 I bought this mitsuba plant.  To be honest, I was confused and thought I was buying mizuna.  So I guess I'll figure out what to do with this one ... 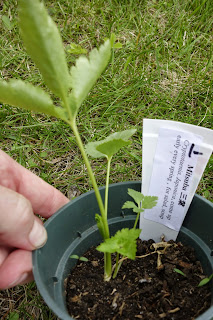 After the effort involved in planting onions this year from sets and my general lack of success in the past, I've considered this being my last year of growing onions.  So I purchased an Egyptian Walking Onion plant - at least if I stop growing annual onions, I'll have something from the garden with this perennial. 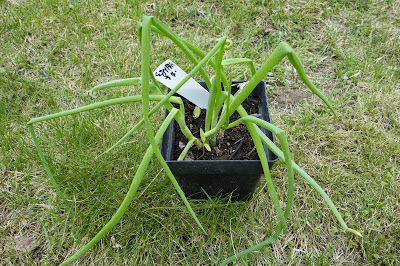 Other than 1 bee balm plant, the only other purchase was a blackberry cane ... but Yuko wasn't sure that it was blackberry and it might be raspberry.  I have raspberry bushes growing wild all over my property and recently transplanted some in an effort to grow some proper fruit.  I do hope this is blackberry though.  She told me she'd give me a freebie blackberry if I didn't get the right one this time so we'll see how it goes. It was only $2 where most blackberry canes would run at least $10 each so I'm more than willing to give it a try. 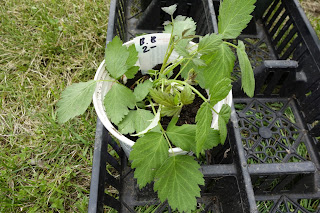