Beans in the Garden: 2015 Varieties 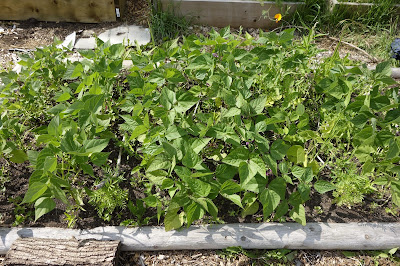 I recently posted about planting borlotti beans as part of the three sisters garden I have; now for the rest of the beans.  I've never grown this many varieties (six!) or quantity of beans before, so I'm quite excited.  But the quantity certainly brings its challenges - especially with management of pests and critters that like to nibble!

I started with this patch (shown above) which was planted May 13th.  I have always direct sown my beans, as I’ve done with all of the varieties I have this year.  I don’t even soak them – just pop them in the ground and then water them in - it has just always worked for me in the past and it seems to have worked well enough this year again.  The plants were already a few inches tall when the frost/freeze hit on May 23rd.  I had covered them with plastic and weighed the plastic down with all sorts of gear from around the yard as there were also high winds.  The majority survived.  Where they were damaged, I removed the plant and reseeded.  The three varieties in this garden are of the bush variety and are all new to me this year … 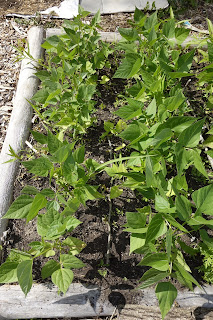 The first two rows on the left are black turtle beans.  I’ve come to love borlotti beans just in the past few years, but I’ve always been a huge fan of black beans, so I’m excited to be growing my own for the first time.  These came from Greta’s Organic Seeds, a local company not far from where I live.  Black turtle beans can be vining or bush.  Although they take more garden space, I find bush beans easier to grow. 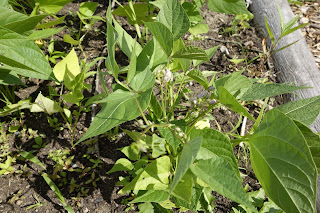 These require a lengthy season – 100-140 days to harvest.  Having them in the ground in early May gives me to about the end of September for harvesting.  Just enough time, as we often experience frosts early in October. 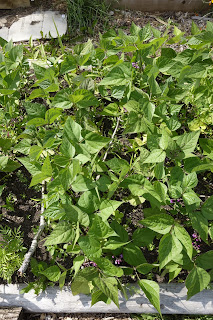 The next two rows (so the middle two) are Royal Burgundy bush beans from William Dam Seeds.


Compared to the long season required for the black beans (and similarly, most drying beans) these have only 50 days or so to harvest.  I can already see the dark purplish pods starting to develop. 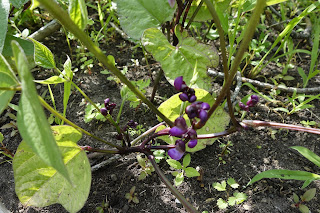 These ones have some nibbles on the leaf but not too bad and its only on a few leaves. 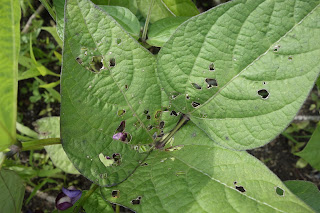 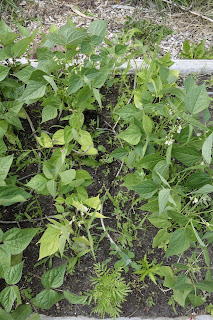 And the last two rows on the right are Delinel – again, from William Dam.  Their website states, “Delinel is consistently the earliest variety in our trials. Excellent taste and holding quality”.  I’m looking forward to trying these!

Although their harvest time is slightly shorter than Royal Burgundy at 45 days, they seem a bit further behind.  Or maybe it's just that their flowers are lighter in colour and not as obvious. 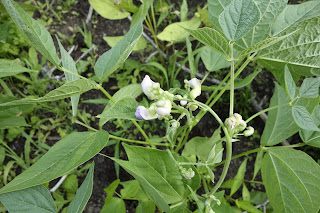 The remaining two bean varieties I have in the ground are vining / pole style.  I finally put together a trellis structure (my first ever!).  It did not take much time (which probably is evident in its lopsided-ness).  But I still seem to be challenged by getting beans (and peas) to climb up stuff.  I’ve got twine hanging down and keep hanging it over the plants hoping they’ll catch on to it – not so much yet (plus the twine keeps getting twisted up every time there is a wind).  Ugh, I think I’ll stick with bush beans in the future. 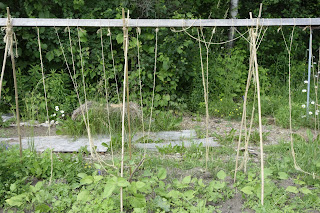 My other challenge is that they keep getting eaten … this garden space is right beside several acres of trees so I imagine there are all sorts of critters coming out of the bushes.  I’ve replanted and they seem to be okay for now, but I lost a lot of beans last year here as well – I guess I should take the hint and move them somewhere else next year!
Anyway, in the area with the trellis, I have Scarlet Runner (grown last year in the three sisters garden which means I didn’t get any at all) and Tarbais - a white bean that I successfully grew last year.  Although I was successful with the Tarbais, there was one mishap.  I mistakenly thought they were fresh beans early in the season (I was also growing Isabel pole beans) and harvested many of them for pickling.  Turns out they were fine to eat at that time (although a bit tougher than a fresh bean might have been), but I obviously had a much smaller harvest for drying at the end of the year.  When planting these out, I still had some Isabel beans left from previous years, but decided against planting any to avoid that problem – I’m unable to properly keep track of where I plant things so best to keep it simple.

And that’s it for my bean round-up.