Leek Moths on the Garlic 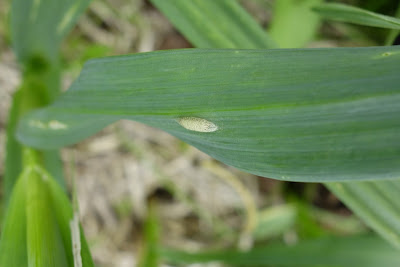 I've been taking a closer look at the garlic plants lately (mostly just checking for scapes to harvest) and just last night realized I have leek moths.  These are an invasive species of moth from Europe that was accidentally introduced into the Ottawa area (where I'm located) in 1993.  It has since spread through Eastern Ontario, into Quebec and as of 2013 was found in Southwestern Ontario, Prince Edward Island and New York State.  Ugh. 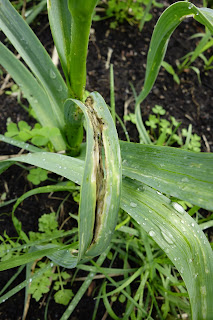 They like all alliums, with their favourite being the leek.  I don't have any leeks.  So they like my garlic for now (and may switch to onions next, who knows).  They bore into the flat leaves (or the inside of onion leaves which are hollow) and eat them inside out.  They continue to the centre of the plant. 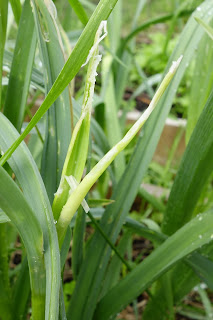 For my garlic, it means the infected plants were damaged at the stalk and won't be producing any scapes (in my case, I found some larvae still inside the small scape that was growing).


Row covers will help ... in most areas they just need to be put back on by dusk and can be removed during the day.  In my area, row covers would need to remain permanently on until harvest.  I have friends who grow garlic that don't bother to cover and just take a chance that they'll have some survive.  I've definitely thought I had leek moth damage in previous years (mostly last year), but had never seen the actual larvae until now. 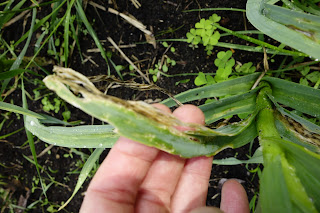 Why are bugs so creepy?!  After spending an hour removing any I could find, I had to come in and take a bath as I kept feeling like something was crawling on me.  How did I go from being a suburban kid afraid of any bug that came near me to being an organic gardener?  I should review my life choices sometime ...

In the meantime, I'll have to keep an eye out.  No point putting row covers on now as there could already be eggs in the soil waiting to hatch.  I found various stages - the pupae in the main photo, the larvae (you know, wiggly creepy wormy things) as well as the empty cocoon stuck to the leaves.  Out of about 70 plants in total, 20 or so probably were infected.  I'll keep them in the ground as I could still get useable garlic if I managed to catch them before they burrowed into the stalk.  So I'll just keep watching them and will pull them early if it looks like they are continuing to spread to other plants (I might be making Michelle's Crema di Green Garlic soon!).

There are various articles on Government of Canada or Ontario Agriculture Ministry sites.  Here's a link to the one I found the background info I mentioned in the first paragraph.