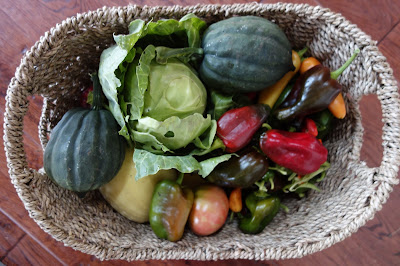 Picking vegetables, pulling out plants, putting in new seeds for fall harvests ... plenty going on this week in the garden.  I have finally successfully grown a cabbage (seen in the basket above).  It's a Tiara cabbage from William Dam seeds.  And I have several more that are almost ready.  Maybe I could have left it a bit longer, but I don't think they get much bigger from the photos I've seen.

Also new this week are the two acorn squash in the basket.  Otherwise, it's filled with more of the same ... ancho peppers, jalapenos, Hungarian Hot Wax and a smattering of tomatoes.  Oh, and I think that's another spaghetti squash in there.

On the subject of winter squash, I cleaned out most of the three sisters patch.  There has been a lot of rain lately and the borlotti beans were flopped over and lying on the ground.  In my attempt to pull all of the beans, I ended up pulling all of the squash as well as I noted many of the vines were dying off or just rotting. So unfortunate that my single butternut squash is a bit immature, but I think the Marina di Chioggia squash (the second of only two I managed to grow) and the Sweet Dumplings were about as mature as they were going to get considering the state of their plants. 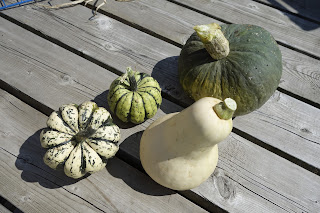 I could use some advice on how to properly store winter squash.  The immature butternut won't last long, but I want to make sure my two Marina di Chioggia keep until I'm ready to use them.  I'll do some checking on other bloggers sites, but if you have a good method for storing squash, I'd like to hear about it.

And then I have lots more of the same ...


I've been cooking a lot this past weekend.  I made oven-dried tomatoes with all of the chocolate cherry tomatoes I've been picking. 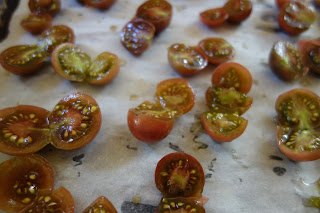 And I picked up a bushel (about 50 lbs) from a local market for $25 and spent the weekend making Red Wine and Herb tomato sauce (7 litres), my homemade salsa (3 litres) and passata (4 litres).  Whew!

Please stop by Daphne's Dandelions to see what other gardeners are harvesting, cooking or storing this week.