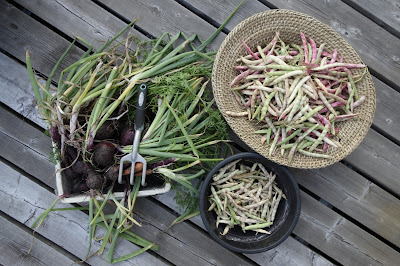 The long-awaited rain in our area finally arrived the last few days, very much welcomed.  For some crops, though, it was not ideal ... namely the bush beans.  I have several varieties of beans this year for drying, with some already falling over and laying on the soil.  Although some were not quite mature enough, I decided to pull all of the beans to avoid further damage.  I will let them dry out for a week in their pods and then shell them for storage.  The baskets above include black turtle beans, Vermont Cranberry, Jacob's Cattle and Canadian Wild Goose (although how much of each I'm not sure as they got all mixed together during the harvest). 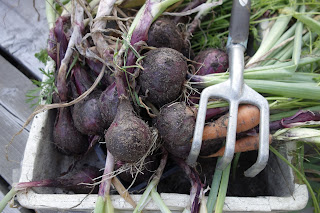 With rain in the forecast, I also decided to pull the onions.  I had decided not to grow any this year as I don't seem to have much success generally, but somehow ended up planting some anyway.  Although they aren't particularly large, I am actually pretty satisfied with what I got this year (but will remind myself not to grow them again next year!). 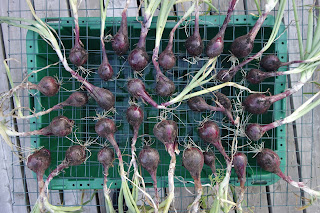 Most of them are between golf ball and baseball size, but are delicious and will be useful when salsa making time starts in a few weeks. 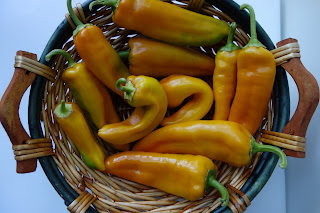 And these peppers will be useful in many ways!  These are Xanthia, but I also harvested about the same amount of other varieties including jalapeno and some other sweet bell pepper types.  Some of the pepper harvest came from this broken limb of King of the North peppers ... the plant had fallen over from the weight of the fruit and I did a terrible job staking it and the branch broke off. 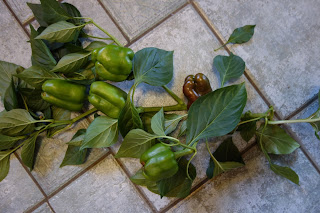 I've still only had a handful of tomatoes but was not expecting a lot this year anyway (and have not bothered to take pictures).  But I am still getting lots of great greens including more of the Croatian Chard (delicious, and tastes more like spinach than Swiss Chard), Tuscan Kale, Swiss Chard and the frilly looking green on the left is Fizz Kale. 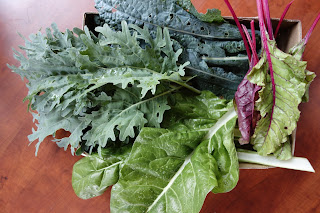 While cleaning out the main bed with the bean plants, I realized that several of the potato plants nearby had been overgrown with weeds.  Oh well ... potatoes are one of those plants I don't spend a lot of time on.  I have volunteer potato plants popping up elsewhere so I'm not too upset.  But I will dig them up soon and see if there is anything under the weeds.  In the meantime, I had a potato bag that also wasn't overly successful with only a single plant (out of three planted in the bag) that produced and here are the results (along with some chocolate cherry tomatoes): 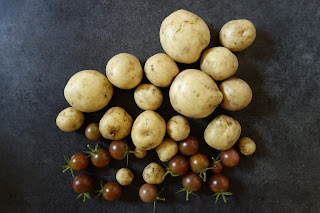 This is my submission to Harvest Monday hosted by Our Happy Acres.  Please check it out to see what other gardeners are doing this week.