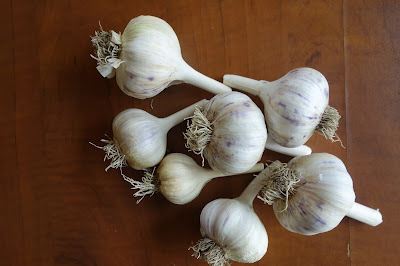 In my previous post on the garlic harvest this season, I mentioned two concerns which I was unsure about.  As promised, I spoke with some experienced garlic growers at one (of many) local garlic festival recently as to what might be the cause.

Firstly, I will start with what may be the cause of losing almost one quarter of my crop (so about 20 or so bulbs).  Only one of the few gardeners I spoke to had an opinion - fusarium wilt.  This is a soil-borne disease, and he recommended not planting anything in the soil for at least five years.  So that's a problem, because as soon as I had harvested the garlic I used the space (two raised beds) for some fall crops including rutabaga, radicchio and a few fresh bean plants.  I guess if the soil is infected, I might see some reaction to these other plants but they all seem fine so far (already harvested some of the beans). 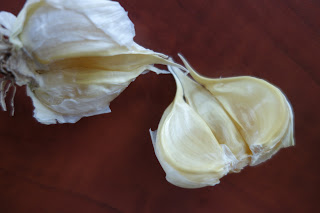 But I do say "if" the soil is infected.  When speaking with this garlic grower, he referred to the bulbs as "waxy".  I had not thought of that description but it seemed fitting  So I googled "waxy garlic" which led me to this link from Cornell University College of Agriculture and Life Sciences.  The photos shown on that website are perhaps a bit more extreme than mine, but the description of the affected cloves as "amber and translucent with sticky, soft, jellylike tissue" is a good match for what I see with mine.  This, however, is not a disease, but is rather associated with high temperatures during growth, and particularly near harvest time.  We definitely had a hotter than average spring and summer this year, so this could certainly be the cause as well. 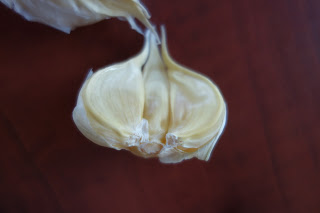 So I'm not sure that I know the cause at this point.  I did believe I had verticillium wilt (similar to fusarium wilt) a few years ago when I had tomato problems, but had not really had issues since that one year. Either way, the bulbs were tossed as they aren't edible (or at least I didn't try as they don't look very appealing) and certainly won't be used for seed garlic.

On the second issue, I asked about the bluish-green colour on some of my bulbs.  He had no idea as he had not seen anything like it.  He did not believe it be an issue with eating the garlic though.  The colour has deepened a bit more since the first photo but it's still hard to get a good shot with my camera.  Either way, I've eaten some, it tasted good, and I'm still here (whew!) - but I do not plan to use any for planting.

Well, what will I plant then?

I really liked the varieties that I planted in 2016, despite the issues I just wrote about.  Perhaps I picked all good varieties, or I'm not enough of a connoisseur, but they all taste great!  I have often stated in the past that no other garlic is as good as Red Russian, the kind I've grown for a number of years and is most common in this area of Ontario.  But the German White and both the Mennonite and Majestic Porcelain are all very tasty with a good bite to them.  I haven't eaten a lot of the Music garlic, but I've grown it before and always enjoy it.  And the Red Russian that I grew this year came out as big as the other varieties which is not my usual experience (the bulbs are usually smaller) and has its usual great taste.

Anyway, I just walked around the garlic festival and was my usual impulsive self and just bought from people who seemed nice with good product! 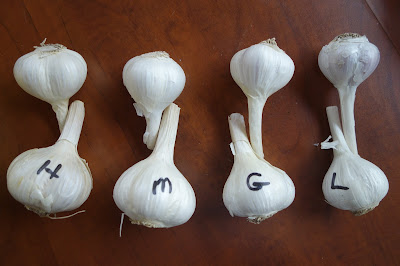 I bought a mixed bag of four varieties (one of the same sources as last year), two of which were the same as 2016 - the German White Rocambole and Music Porcelain.  And two new ones (with an Eastern European theme which seems common with garlic) ... Hungarian Rocambole and Leningrad Porcelain.  I haven't done a ton of research on these two new ones although I did see several websites that mentioned how hot the Leningrad garlic is (great news!).  I don't know yet how many plants I will get of each as some of the cloves are quite small and I'll likely only plant the medium to large cloves. 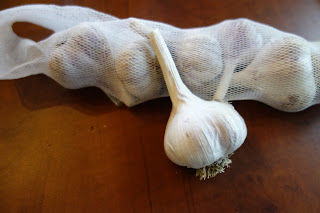 And I purchased a sleeve of Gem garlic (also shown in the main photo) from Riverside Garden of Almonte Ontario. I didn't see anything on their own website about this garlic but found this reference to it at Territorial Seed:

Late-season. This rare jewel was rediscovered at a germplasm collection in Washington State. A glazed purple stripe strain, it produces 4-6, hefty, wedge-shaped cloves per head. Our taste-testers describe its flavor as pleasantly spicy, hotter than Music, but not overpowering. Stout, productive plants have shorter, dark green leaves and ivory-wrapped heads streaked in violet.

So wow, germplasm collection ... yes, I had to look up what that meant, and no, I still don't understand.  But I tasted some at the garlic festival before purchasing it and I loved the taste and heat of it.  The seller did point out that some of the cloves were on the smallish side so, again, I'm not sure how many cloves I'll get out of them.

I still have to figure out where these are going as I usually get them in the ground in early to mid October. Although I have several spaces cleared already, I do not have as many options as I normally would as I planted a number of crops for a later harvest in the fall.  I'm sure it will all come together as it usually does.  :)