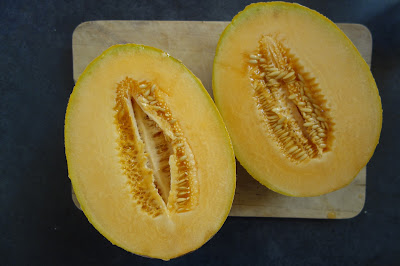 I've spent more time this week using previous harvests than I have harvesting new items but there is still plenty left in the garden.  I harvested another Hale's Best Melon - this one shown weighing in at 3 lbs.  And another one - 4.5 pounds so the biggest so far - was harvested yesterday and had a bit of a nibble on the stem end (it had come off the vine so I guess I should have harvested it sooner).  I just cut off the end with the nibble and ate the rest. 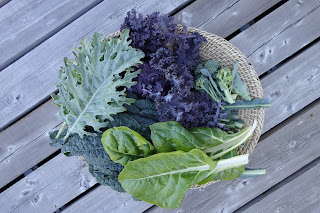 The bottom of the basket is mostly full of Tuscan Nero Kale, along with Fizz Kale, Curly Scarlet Kale and Croatian Chard.  On the right, you can see a small number of broccoli side shoots. 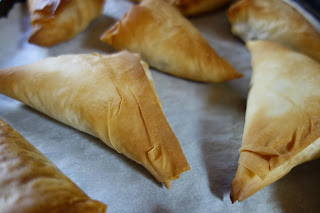 Some of these greens ended up wrapped in phyllo similar to my kale and ricotta phyllo packets recipe. 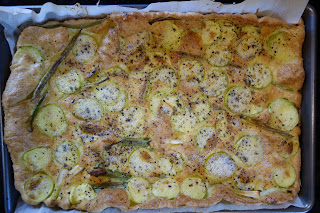 And some of the Tromboncino squash I harvested last week was used to (finally!) make Michelle's zucchini tart (scarpaccia).  I fiddled a bit with the ingredients and it came out a bit puffier than her photo but delicious nevertheless.  Thanks for the idea Michelle, I love the concept of that type of batter mixed with veggies and am looking forward to trying other variations. 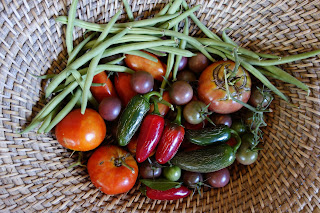 The last of the harvest this week included more Delinel green beans, and an assortment of tomatoes and peppers.  These peppers and tomatoes along with most of what I had in the kitchen went into a small batch of tomato sauce which ended up in the freezer. 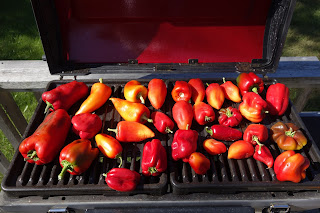 I roasted a big batch of peppers that had been harvested over the past few weeks.  Once the skins were cleaned off and the seeds removed, they went into baggies and into the freezer.  And I'm still in the process of drying / dehydrating the big batch of Feher Ozon (for grinding my own paprika) along with some ancho peppers and cherry tomatoes.

And I also roasted one of the Marina di Chioggia squashes which went into two dishes: a really delicious version of Butternut Mac and Cheese as well as a luxurious breakfast of Pumpkin Pancakes. 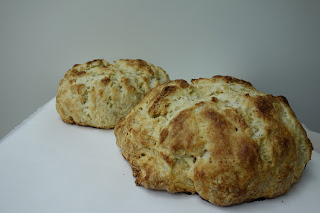 Since I spent so much time in the kitchen this weekend, I decided to use up some buttermilk I had in the fridge to make these two loaves of Irish Soda bread.  Not too shabby for my first try!

Please pop on over to see what other gardeners are doing this week at Harvest Monday hosted by Dave at Our Happy Acres!