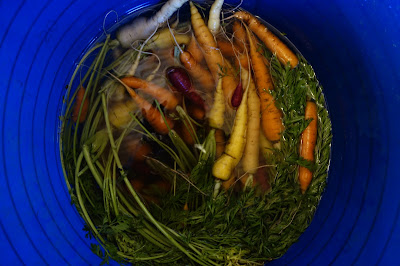 Carrots and Queen Anne's Lace ... can you tell the difference?  I am not quite fully educated on the "weed" known as Queen Anne's Lace but I can usually tell which is which before pulling up the root.  I put the word weed in quotes because not everyone thinks of it as undesirable and it is edible.  I personally consider it a weed that has cleverly disguised itself as a carrot (greens look the same but the root itself looks like parsnip).


But it is not so much a disguise as it is an actual carrot.  From what I've read, domestic carrots are a cultivar of this wild carrot.  I used to think how amazing nature is that a weed looking just like carrots happens to grow among carrots (like some brilliant defense mechanism hoping the bunnies will nibble on the weeds instead).  Since the carrot seeds (if I understand it correctly) have been cultivated over years from this wild carrot, then I guess the wild carrots are likely coming from the same seeds as some sort of hybrid?? 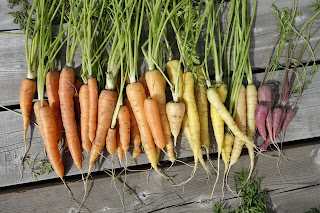 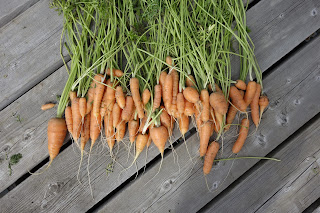 With this weeks harvest, I've added another 5 lbs of carrots (shown above) and that's the last carrot harvest for the season.  Other harvests include more peppers, some Delinel beans and a  batch of basil that was made into pesto and frozen for later use. 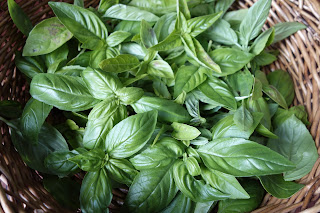 And a new harvest this week ... apples!  These are Haralson apples, and the first time the tree has produced any.  The tree was here when I moved in a few years ago and I was actually considered removing the tree as I wasn't sure it would ever produce.  Good thing I waited!  I only got three pounds but good enough for some apple crisp. 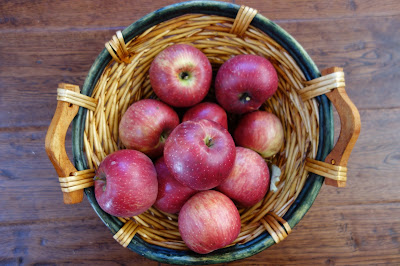 I also had another (4 lb) Hale's Best Melon which went to a friend.  While dehydrating the latest harvest of chocolate cherry tomatoes, I finally got around to grinding up the Feher Ozon peppers for a paprika.  I added some to another batch of squash mac 'n cheese and I LOVED IT!  The paprika smells wonderful and was a great addition to the dish. The photo below shows three trays worth of peppers after dehydration and just before I ground them. 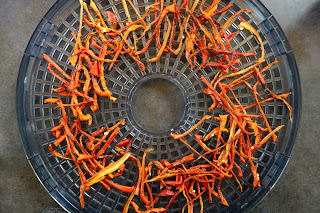 Please stop on by at Our Happy Acres to see what other gardeners are doing this week with their own harvests!