I really suck at growing flowers. I'm OK with veggies, but flowers are not my strong point.  I think I had a reasonably good ideas for different variations on vertical gardening, but my vision did not come to fruition.

During the initial "installation" of the bed frame, I kept all 4 sides attached and simply buried one of the long sides in the ground and covered it with soil.  Once I had hung the old canvas shoe rack and filled each pocket with dirt, I realized it was a little on the heavy side and I wasn't sure the "hangers" that came with it were up to the challenge.  So I cut it back to every second pocket.  I had planted nasturtium seeds early in the spring, so popped them into the pockets when they were about 6 inches tall.  At this point, I was going to post a picture (below) because I was so excited about the idea. 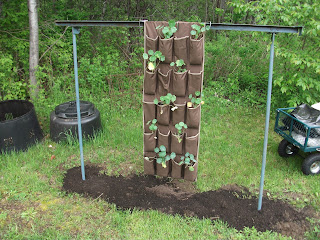 Then I thought that maybe I should wait until they are in full bloom and overflowing with beauty in the summer time.  Well ... that never really happened.  What the heck?  Are all those gorgeous pictures of nasturtiums hanging in massive clumps out of some people's baskets some special variety?  Are there actually 100 nasturtiums all packed together to get that awesome look?  The best mine ever looked was this picture below ... around early July (weird flash, it was the middle of the night).  And I don't know what to say about the impatiens ... I thought they were meant for hanging containers, but in hindsight, maybe it just said good for containers period, nothing about hanging ... they never grew past the edge of the container. 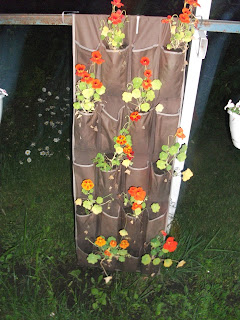 To make things worse, I had not buried the bed frame deep enough, and it fell over (under the weight of the flowers and soil) several times before I finally propped it up with what was left of the post from the For Sale sign when I bought the house! 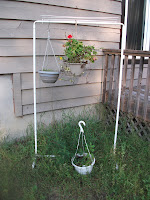 As for the clothing rack, the issue was obviously just the choice of flowers.  But they were chosen because some website somewhere said they were good for hanging baskets!  I tried sweet alyssum, lobelia, I can't remember what else.  These were purchased from a local store but never grew beyond a few inches above the soil.  I finally broke down and just bought a hanging plant, mostly containing geraniums.

I even tried planting sweet peas around the bottom of the rack hoping they would climb up the poles, but they never grew beyond 6 inches, then just got tangled in the weeds (so OK, I need to mow and/or weed better next year).

And I took a piece from a broken shelving unit from the greenhouse, propped it up against the side of the house and planted morning glory all around it.  So here it is months later, and nothing! 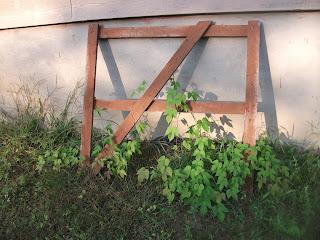 It's kind of running out of time to get all big and glorious for me ...

The bed frame is staying where it is and the clothes rack will be put away for the winter.  In the meantime, I need to do some serious research to make these a success next year.

I certainly would appreciate input on flower types, the number of flowers to pile into each container, and I suppose I'll need to look at fertilizer and soil types as well if I want to make this work in the future.

Thoughts and suggestions will be much appreciated!