Verticillium Wilt - Death to All My Tomato Plants - Help! 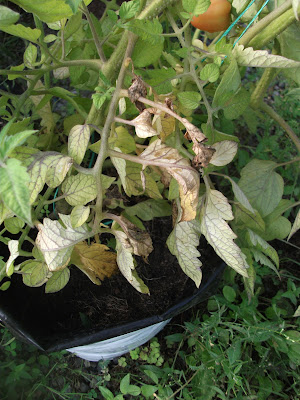 I've known there was a problem with my tomato plants for a few weeks now (maybe longer).  Although I have been careful about the watering routine after a small incident with blossom end rot earlier in the season, I thought that could still be the problem.  This is the first time I've grown tomatoes in containers, and also the first time in a greenhouse.  So keeping the water level just right can be challenging. 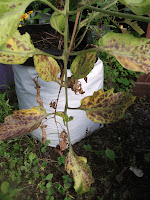 But my routine has been really steady, so earlier this week I decided it must be a nutrient deficiency.  The purple on these leaves, from what I've read, might indicate a phosphorus deficiency.  I purchased some organic fertilizer and gave the plants a feeding earlier this week.  But deep down I knew that wasn't the problem either.

The plant foliage flourished early and the amount of flowers suggested a good yield this year.  But the fruit really never came.  I've luckily enjoyed some tomatoes, for sure, but with 50+ plants, I was expecting a busy harvest.  Most of the plants haven't got a single tomato on them, and the few that do are struggling along.  I think I was just trying to avoid the issue and let things go on way too long. 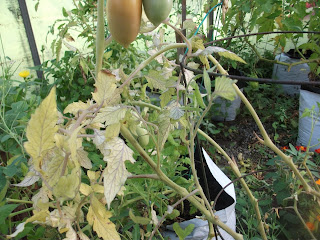 Needless to say, I've finally decided they have been infected with Verticillium Wilt, a fungus that infects the plants.  I really don't know much more than that and even that I'm not entirely sure about.  I've read that it is important to immediately remove the plants from the area, which obviously suggests it is "contagious".  I do know that it does not affect humans, so I am not concerned about the tomatoes I've eaten (or the few that I hope to still harvest). 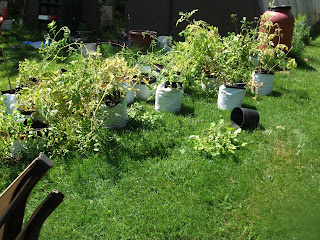 Today I removed about 35 or so plants from the greenhouse.  Those remaining I am quite sure are equally infected.  But they still look healthy enough to last a few more weeks and I hope to get a few tomatoes out of them before I pull the plug - especially the Brandywine heirlooms which I was hoping to use for saving some seeds. And these Black Krim's are so close to being a drool-worthy tomato salad. 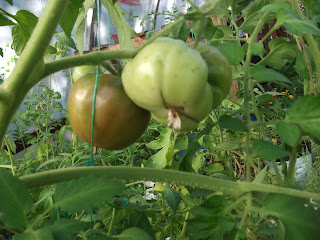 I know there is no help for saving the infected plants now.  Any without tomatoes will be chucked into the back bushes, and those with tomatoes will be kept away from other plants and just long enough to get a few more tomatoes.   Surprisingly, most of the pepper plants in the vicinity seem unaffected (so far).  But I'll keep a close eye on the rest of them. 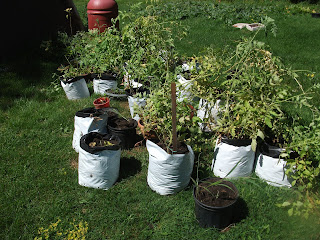 My main concern is how this happened?  Is it possible that it is a soil-borne fungus, meaning that the soil I purchased was already infected?  I bought 12 yards from a local supplier in the spring and have been using it in raised gardens (nothing in the tomato family so plants seem to be doing fine for now) but also plan to build several new gardens for next year.  From what I understand, the fungus can infect the soil indefinitely.  WTF - what am I supposed to do next year?  I suppose I can buy new soil for tomato planting, but what about the other related plants ... peppers, potatoes, eggplants?  I can't replace all of my soil.  Arrrggghhh! 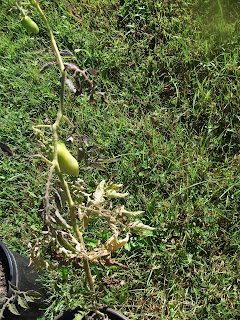 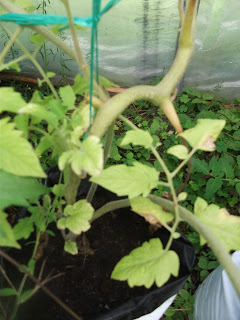 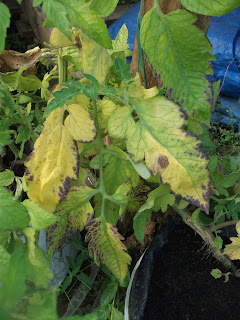