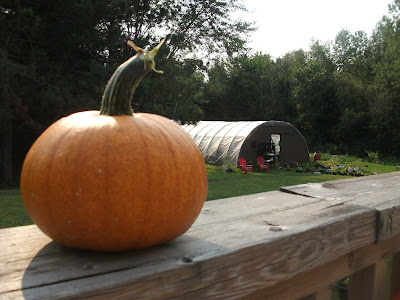 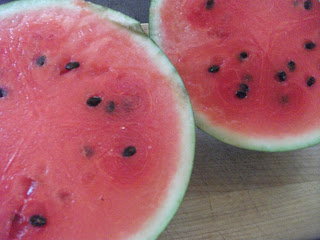 This watermelon was so ripe it almost split itself open once I started cutting into it.  I was hesitant to pick it; until now, I had only bought watermelons at the store.  I had read somewhere that the vine attached to the stem would brown and shrivel a bit when ready, but that did not happen.  I simply decided it sounded and felt ready.  And it was very heavy (8 lbs) for its size (these are Jade Star Hybrid Watermelon). 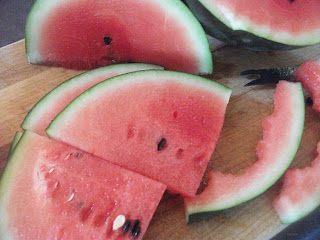 I have several of these left, but also planted some other watermelon seeds that I purchased at the local store to ensure a bigger crop when many of my first batch did not germinate - watermelons seem really hard to germinate, or am I the only one that experiences this?


I accidentally knocked a watermelon off the plant a few weeks back so cut it open to see if it might be ripe.  It was white inside!  I had no idea they grew like that. 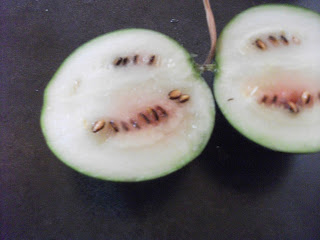 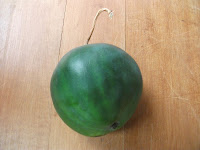 The small Sugar Pumpkins appear to be ready as well.  And they really are small (1.75 lbs)!  I only managed to get a few for now, but there is still hope for more.  These are supposed to be great for making pies, so I suspect that will be my first use for it. 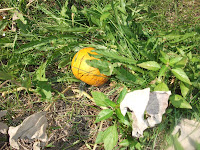 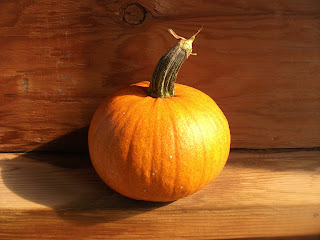 And finally, one of the white (lumina) pumpkins growing from seeds that I saved from the previous year has started to grow (most of my pumpkins died early from the area flooding during heavy rains). 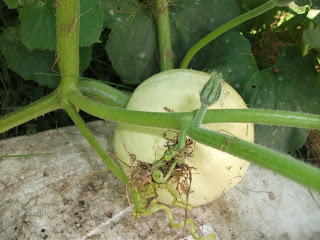 I had purchased one seedling of a muskmelon from the local farmer's market this year and I put it in a container. It grew well enough to grow a single fruit.  I thought the plant and the fruit were dying but then all of a sudden the fruit was ripe (but much smaller than I expected - which is probably why it has a bit of brown at the top; I probably left it too long on the vine).  I don't normally like cantaloupe so was hoping that eating a melon fresh from the garden might improve the taste for me.  Not so ... I still don't like it. 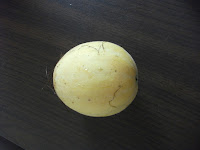 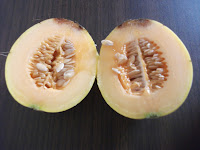 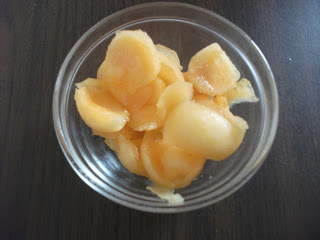 In addition to the single muskmelon plant, I also planted cantaloupe.  I will give the taste another try when those are ripe, but most likely will be giving those away to friends. 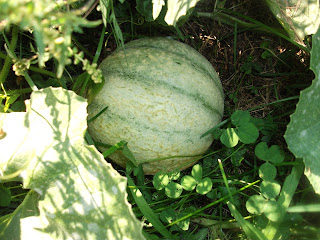