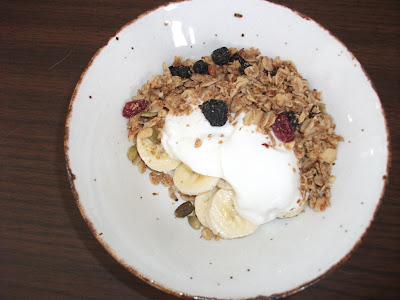 Granola gets a pretty bad rap about being unhealthy, but when you make it yourself, you can control the bad stuff – like the amount of oil, and the type of sugar.  I have tested this recipe with varying amounts of oil and it is difficult to go less than the amount listed without impacting the crunchiness and overall texture.  For sugar, I use a combination of brown sugar and maple syrup – I would imagine you can replace some of this if you prefer honey for your sugar source, but I have not tried it yet.  I like to get some of the sweetness from the dried fruit, so if you decide to cut back on that, you may want to slightly increase the sugars.  And I usually hold back 1 cup of the nuts until I see how small they got munched in the food processor – if too small, I’ll hand-chop the last cup to get some bigger pieces.

This recipe makes about 4 ½ litres – although it’s very simple, it’s a bit time consuming, so I make it in large batches and keep a jar in the fridge, and the rest in the freezer until needed.

Preheat oven to 275 degrees.  I cook mine at a low temperature so that I don’t have to be quite so obsessive about checking on the granola – nuts are too expensive to risk burning!

Mix the following in a large bowl (mix well before adding the syrup!):

Coat the dry ingredients with the syrup.

Spread out onto 2 large or 3 small baking trays and place in oven.  Bake for 10 minutes at 275, then turn down to 225 for another 10 minutes.  I usually give it a stir at this time – try to turn all of it over, especially around the edges.  After another 15 minutes, start testing it every few minutes for the crunch.  Make sure you test the oatmeal bits; the nuts will actually be soft until they cool off, so it’s the oatmeal that will determine the crunch at this stage.  It’s usually around 45 minutes total. 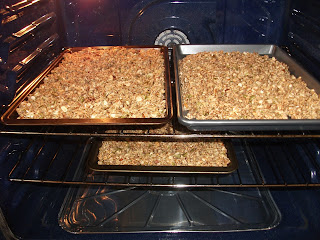 2 ¾ cups dried fruit (blueberries, cherries, cranberries, your choice).  I’ve added up to 4 cups at this point, so it’s really a matter of how much fruit you like in your granola mix. 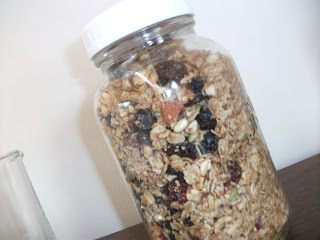 I like to eat healthy, but I’d rather eat a small amount of something rich tasting, than a lot of something that is watery and bland.  So I make my yogurt around 6-8% milk fat.  I do this by mixing different amounts of whatever dairy I have in the fridge.

I usually use a 1 litre carton of 10% half-and-half and 1 litre of 3.5% milk which ends up as 2 litres of 6.75%.  I actually don’t eat a lot of yogurt – I find it lasts at least a month in the fridge, so lots of time to use up 8 cups of yogurt through cooking (marinades, salad dressing, and mmm … tzatziki) or just on its own.

Bring the milk products to just under a boil (you don’t want to let it boil, ugh!).  Take off the heat, and add about 2 Tbsp of non-fat dry milk powder.  This is totally optional, but I find it increases the richness.  Let cool to lukewarm, then add 1 heaping Tbsp of plain yogurt (either commercial yogurt, or some from your last batch).   So this is just like yeast for bread, and will not work if your milk is still too hot.   Then pour it into jars (I don’t sterilize the jars but I do rinse them under really hot water before filling them up), and pop a lid on.

If you have a yogurt maker, follow the instructions.  Otherwise, jars can be put in the oven on “proof” if you have that feature (this takes less time), or left on top of the fridge (or other slightly warm location) for 8-15 hours until thickened. 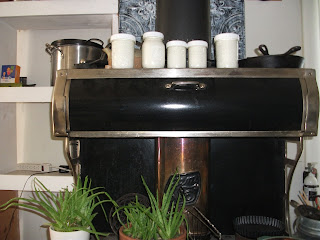