Katish: Our Russian Cook is a novel written in 1947, but originally published as a series of articles in Gourmet magazine.   It's an OK novel but the best part is that every page or two contains a recipe that is somehow related to the story.  The very first recipe in the book is for Katish's Cheesecake and apparently it is one of the most requested recipes in the magazine's history.  Here is a scan of the recipe straight from the book:

Cheesecake is, without question, my favourite dessert.  But a lot of my friends and family don't feel the same way.  Many think it is too heavy and rich.  I have made so many cheesecakes in my life that I haven't required a recipe in some time. I often add sour cream or sometimes whipped cream to lighten it up a bit.  But this particular recipe provided me with a new technique that really helps to lighten up the cheesecake and creates an even creamier texture - rather than adding whole eggs, it uses the yolks early on, then the last step before baking is to fold in the whites that have been beaten to fluffy peaks.

I always strictly follow a recipe the first time through so I can honestly say this one works very well.  But tonight I made it in a square pan as I didn't have quite enough cream cheese as the recipe calls for (so adjusted the rest of the ingredients accordingly, including the use of two large duck eggs instead of the 4 chicken eggs called for in the recipe as that was all I had in the fridge).

It can definitely be eaten as is, or enhanced by various additions (individually or in combination): zest and juice of 1 lemon added to the batter for a subtle flavour, a drizzle of raspberry coulis when serving, chocolate shavings on top or maybe cocoa added to the batter, or my recent favourite which is swirling in my homemade stewed ginger rhubarb before baking. But I used my last jar of rhubarb before Christmas so ...

I have had a jar of Happy Goat Vanilla Bean Caramel Sauce in the fridge for a while.  Yes, you read that correctly.  Caramel Sauce made with Goat Milk!!  It is amazing!  I don't eat a ton of sweets, but during the winter, I got into the habit of eating this caramel sauce on graham crackers as a quick dessert in the evening. I figured it was time to use it up, so I warmed it just enough that I could dribble some over the crust (which I made with crushed Breton crackers instead of zwieback - I often use Ritz crackers as well).  Note: when cooking with caramel, it can harden depending on the recipe during cooking, so I deliberately did not cover the entire crust.  It came out nice and chewy on the bottom. 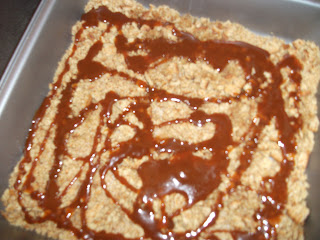 And a final dribble of the caramel on the top for extra flavour, to pretty it up a bit, and let's be honest - it also helps to hide those cracks that always seem to form in the top of a cheesecake no matter what method I have tried to avoid them.  I hope that my photography skills seriously improve as a result of this blog, because I know that I kind of suck at this.  So please bear with me.  I don't think this final picture quite does it justice, as it really did come out with a light fluffy texture, but still very much that traditional cheesecake taste! 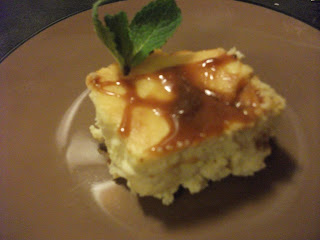