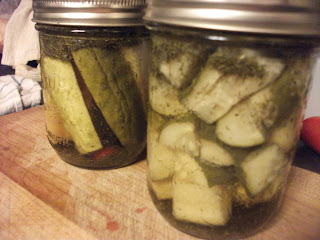 The few cucumber plants I had in the greenhouse have just now died off, but the 3 planted in hay bales are beginning to thrive.  Between the two sets of plants, I managed to scrounge enough cukes for a small batch of pickles.

I'm pretty new to making pickles; I've made cucumber or zucchini relishes once in a while, but not so much actual pickled cucumbers.  This is my version of dill pickles based on the "Quick Dills" recipe from a book I've had for years (thrift shop somewhere!): The Complete Book of Pickles and Relishes (Leonard Louis Levinson) published in 1979.  It was one of the few recipes that did not involve overnight, or in many cases days, of fermenting.  Hence the "quick" in the title.  The recipe gives the option of fresh or dried dill ...  I guess it's the time of year for pickling as the three stores I visited were sold out of fresh dill.

I'm not experienced enough in canning methods, and since there are some health risks, I will defer to the professionals to explain how to properly process pickles if you have not done so before. 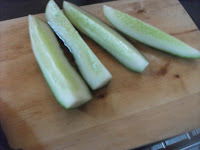 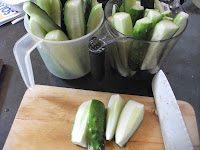 * When I started to pack the jars, I realized I had jars of different heights; when some of the cucumber quarters did not fit, I just chopped them into big chunks.


Combine salt, vinegar and water and bring to a boil.  Place 1 Tbsp of dried dill and one clove of garlic into each sterlized jar, then pack with cucumbers.  Pour in pickling solution and process using appropriate canning techniques. 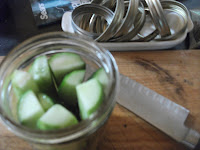 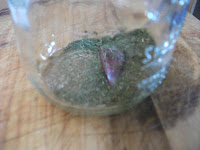