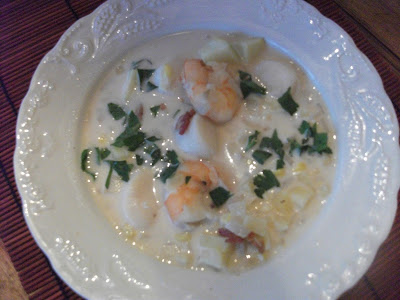 I have been seeing corn at roadside stands starting about two weeks ago ... I was worried that I was running out of time to get some fresh corn, so I harassed my friend Dan for his chowder recipe as I have always loved his version(s).  When I was waiting for change at the roadside stand, I asked how much longer they would be selling.  Into September!!  How did I not know how long the growing season is? I soooo love fresh corn.  But it has to be eaten the day it's picked (assuming you can believe they just picked it that morning).  It can get very starchy very quickly and that kind of ruins it for me.

Chowder is one of those things that always seemed so complicated to me.  Until you actually do it yourself and realize there isn't much to it!   One of my concerns was timing - the last thing I would want to serve is overcooked (or undercooked) seafood. Dan gave me the basic ingredients and technique and left it up to me to figure out specific amounts and timing.

During my bit of research, I realized there are different methods; some people put the seafood in first, then the cream (or other dairy), and some people the opposite.  I figured the easiest approach was to get everything else ready, then put the seafood in last so you can serve as soon as the seafood is ready.  In fact, I only needed two servings when I made this (it makes about 5 servings), so I only added enough seafood that was going to be eaten.  I can add more seafood when I reheat the leftovers.

Another alternative for cooking the seafood just the way you want - which I'll try soon but depends on the seafood you are using - is to sear (and so mostly cook) the scallops, grill the shrimp, flash fry the fish or whatever else you might want to use so that they only get popped in at the end to warm up.

So here is my version of Dan's chowder recipe: 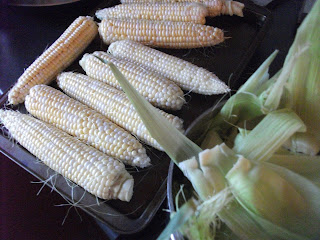 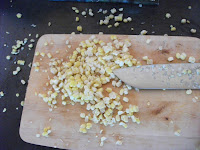 This can be done a day ahead of time, but to have the freshest corn, best to do it all at once.  Bring a pot of water to boil (at least 3 litres).   While removing husk from corn, discard the outer pieces, but retain the cleaner inside husk.  Cook 5-6 ears of corn for only 1 minute and let cool.  Cut corn off the cobs and set aside (why is it so messy!?). 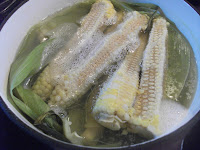 Put cobs and clean husks into cooking water and continue to cook at a rolling simmer for approximately 1 hour.  Add some salt.  You want the cooking liquid to taste like corn, but don't over-salt to force the flavour.  Continue cooking if necessary to get some corn flavour into the broth. Set aside.

Step 2: In a large pot, cook to mostly crisp 3 bacon strips, chopped into 1-inch pieces.  Remove bacon (set aside for later) and most of fat, leaving about 1-2 Tbsp.

Step 3: Add to fat, and sweat the following ingredients (you don't want colour on them) - about 10 minutes: 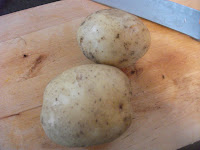 Step 4: Add 2 potatoes (preferably yukon gold) diced small plus 1 litre (4 cups) of the corn broth and the cooked bacon pieces.  Cook at medium heat approximately 10-15 minutes until potatoes are starting to cook through.

Step 6: After just a minute or two to let the milk heat up, add seafood:
4 small or 1-2 large sea scallops per serving
2 large tiger shrimp or several smaller size per serving 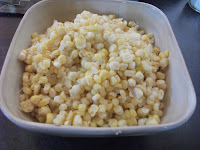 Step 7: After another minute or two, add 1 1/2 cups of the corn (lots of options for the leftovers, or just add more if you want).  Dill would also be good (I didn't have any).  Season to taste with S&P. 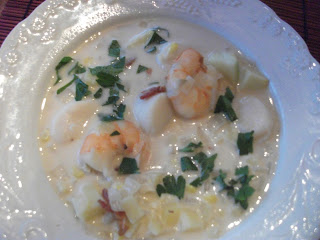