I've spent the entire winter thinking about how to set up my new 8x12 Lexis Greenhouse ... well, that plus more than a few thoughts about why I chose to live in Eastern Canada with these miserable winters. But it's been a very exciting process for me. It was SO warm inside the greenhouse a couple of days ago (38 degrees Celsius) despite the fact that I still have a ton of snow in the yard. 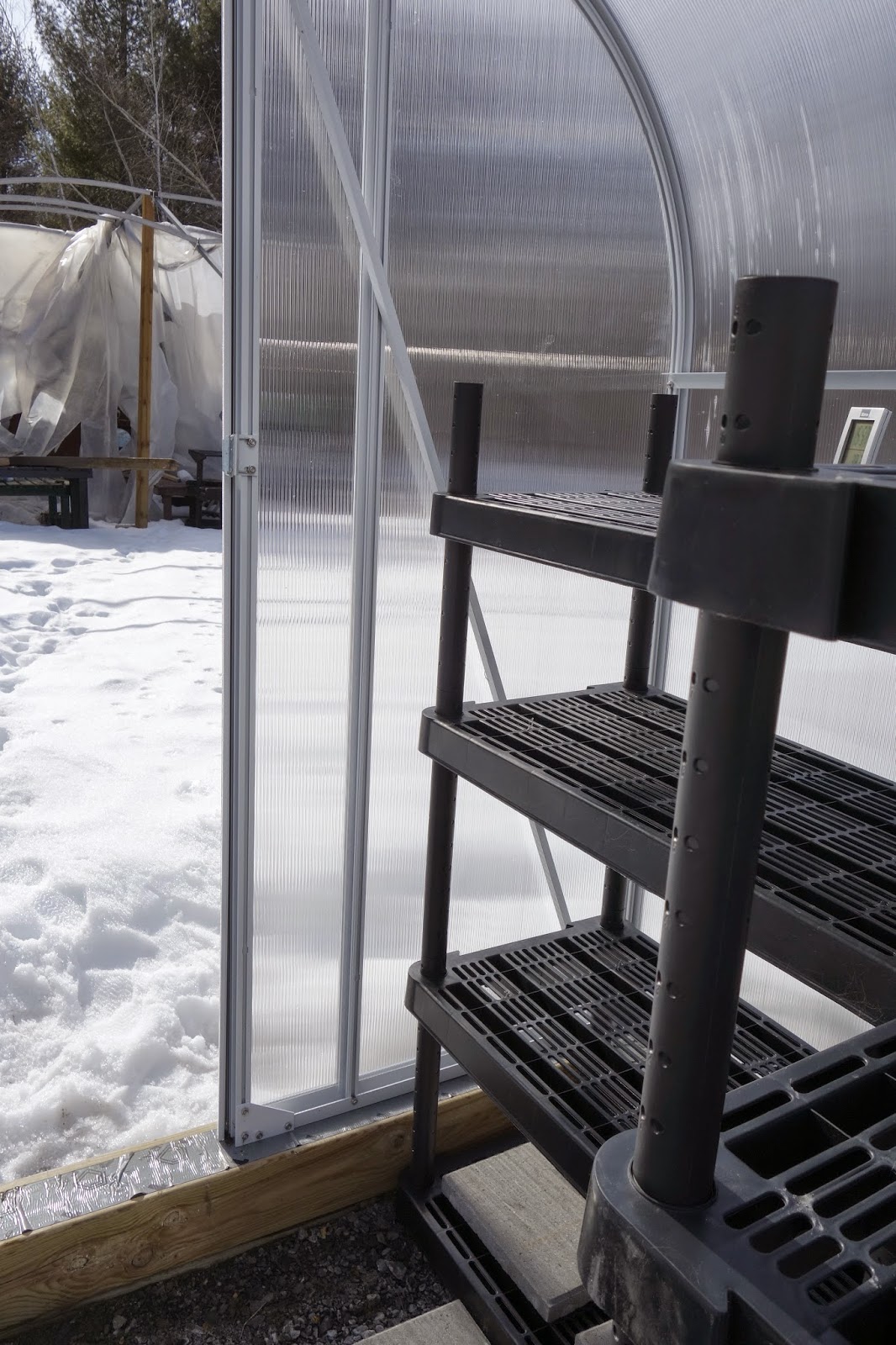 My plan has always been to crowd as much as I could into it.  I didn't spend the money so I could have a cutesy little place to relax and maybe read a book on cold days (I can't remember what I google'd to find this image below, but wow).  Not that it's a bad idea ...I just have better things to do with my limited cash! 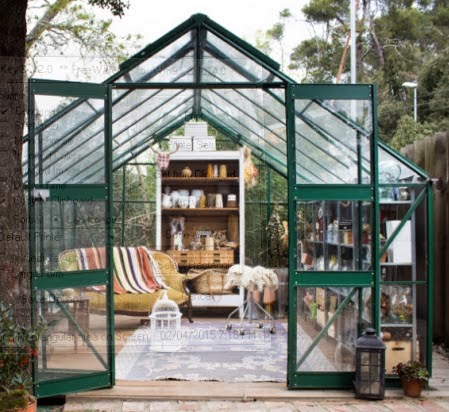 So I read a lot of books and searched the internet for the best approach to designing the interior space of a small greenhouse.  The main point, naturally, related to getting the best benefit from sunlight ... that is, after all, the main point of having a greenhouse. 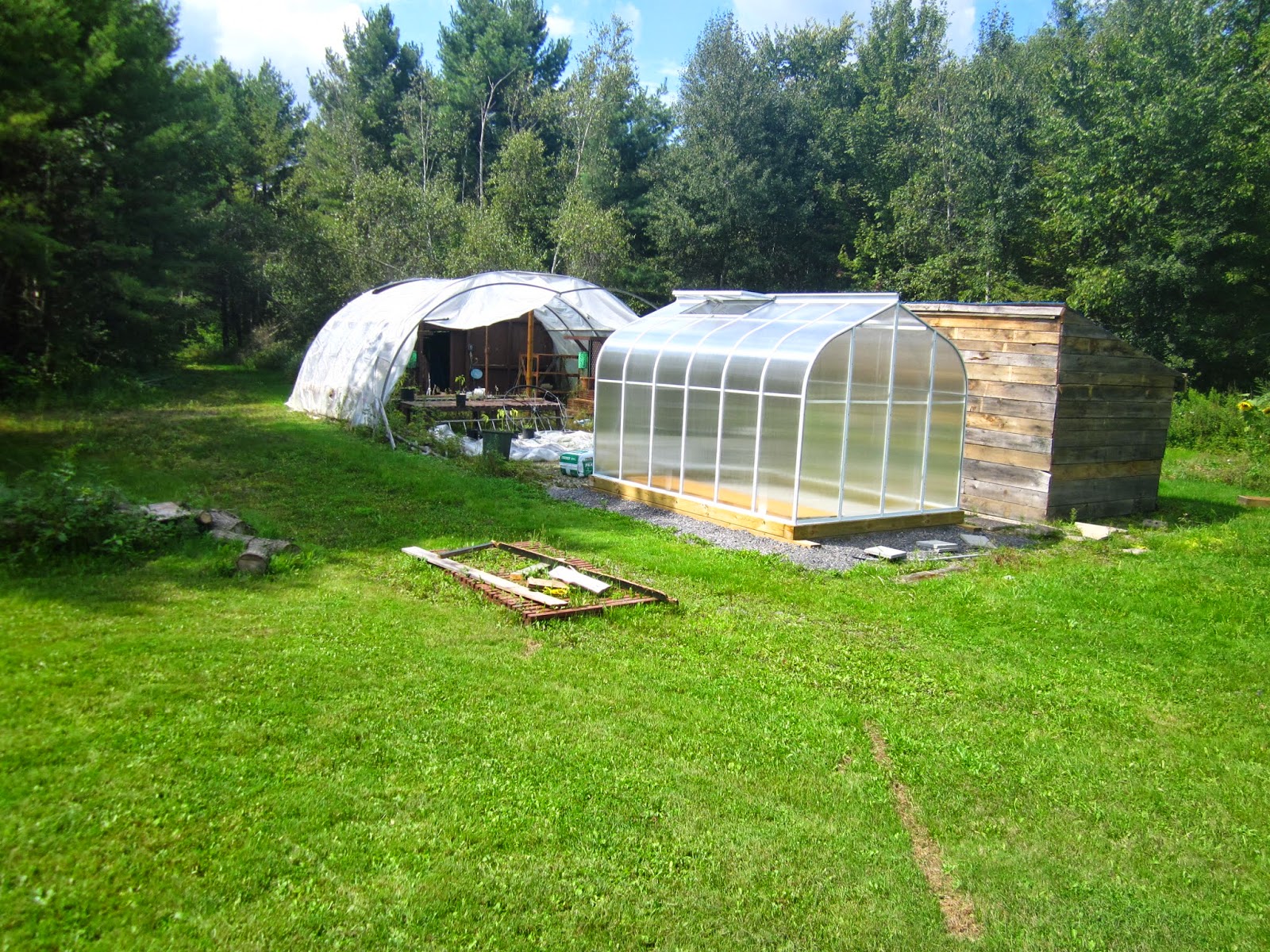 The greenhouse was built so that the length was east-west.  It is also built on the northern end of my property.  This allows it to have the most exposure of sunlight during the day. The tallest structure in the greenhouse should be in the northwest corner - this will avoid or reduce the casting of shadows on the rest of the interior. 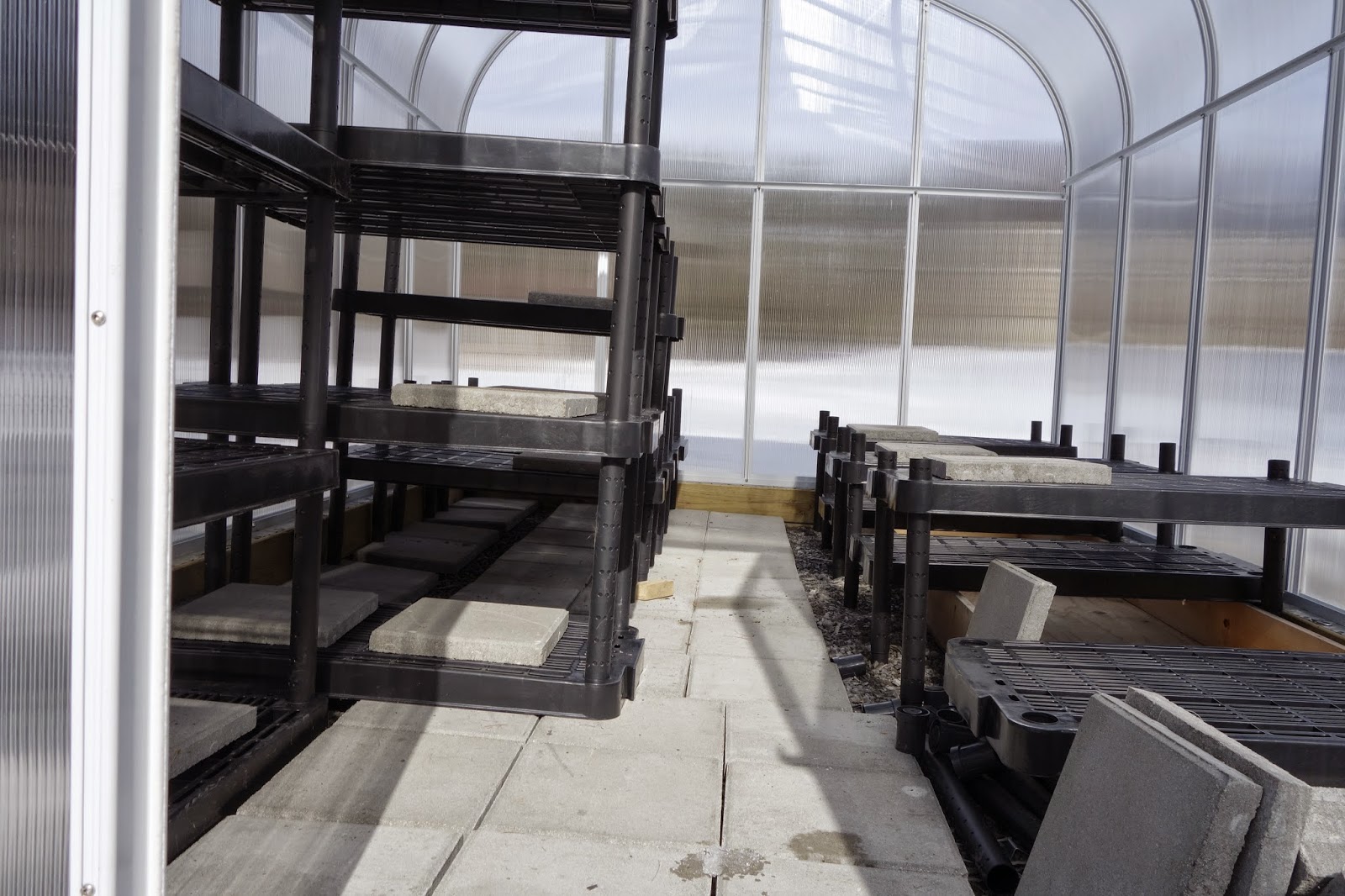 To ensure the greatest benefit from sun, the highest shelving is on the north side and the lowest on the south.   The shelving itself was quite a source of anxiety over the winter.  My first choice, cedar garden benches, are definitely out of my price range.  Maybe if I was handier I could put something together myself  but I'm not so handy (to mangle a Red Green quote*, "if you aren't handy, you'd better be handsome").  I had originally thought of buying shelves designed for greenhouses.  I then realized they looked just like the resin shelving I had in the basement for storage.  So I bought a bunch of adjustable resin shelving units and made my own version of garden benches - I paid about $160 for 4 units that became my interior benches (I'm guessing a quarter of the cost had I ordered the benches in the earlier link).

On the southern side of the greenhouse, I will have a garden bed.  The frame of the bed is actually one of the shipping crates that the polycarbonate panels were shipped in. 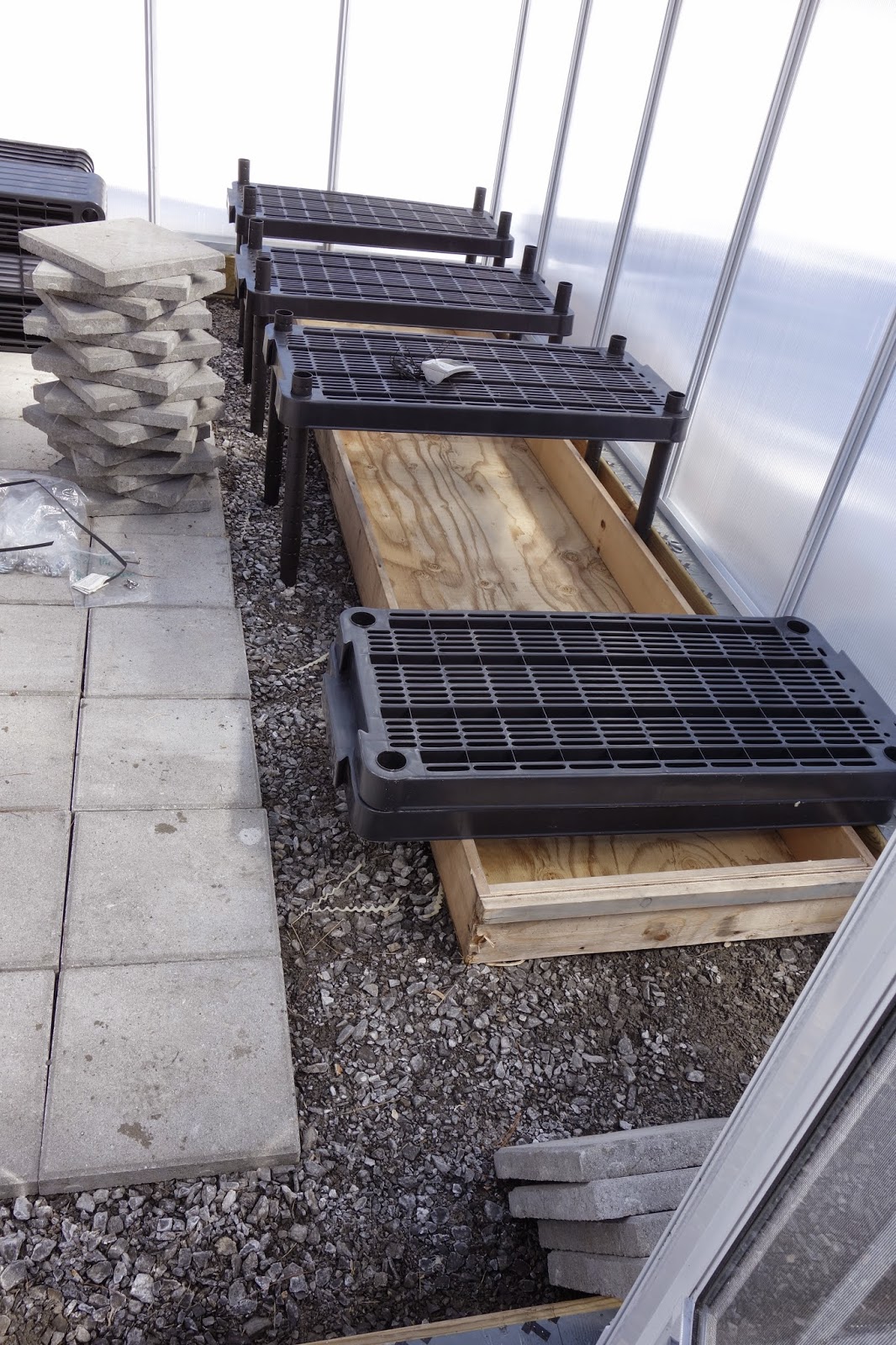 On top of the bed, I will also keep some low shelving staggered across the bed.   I'll manage the plantings so that low crops (radish, lettuce) are directly under the shelves while taller crops are in between.  I had laid down patio stones in the fall but didn't want them under the bed so had to shuffle things around a bit (hence all of the stones lying around in most of these pictures). 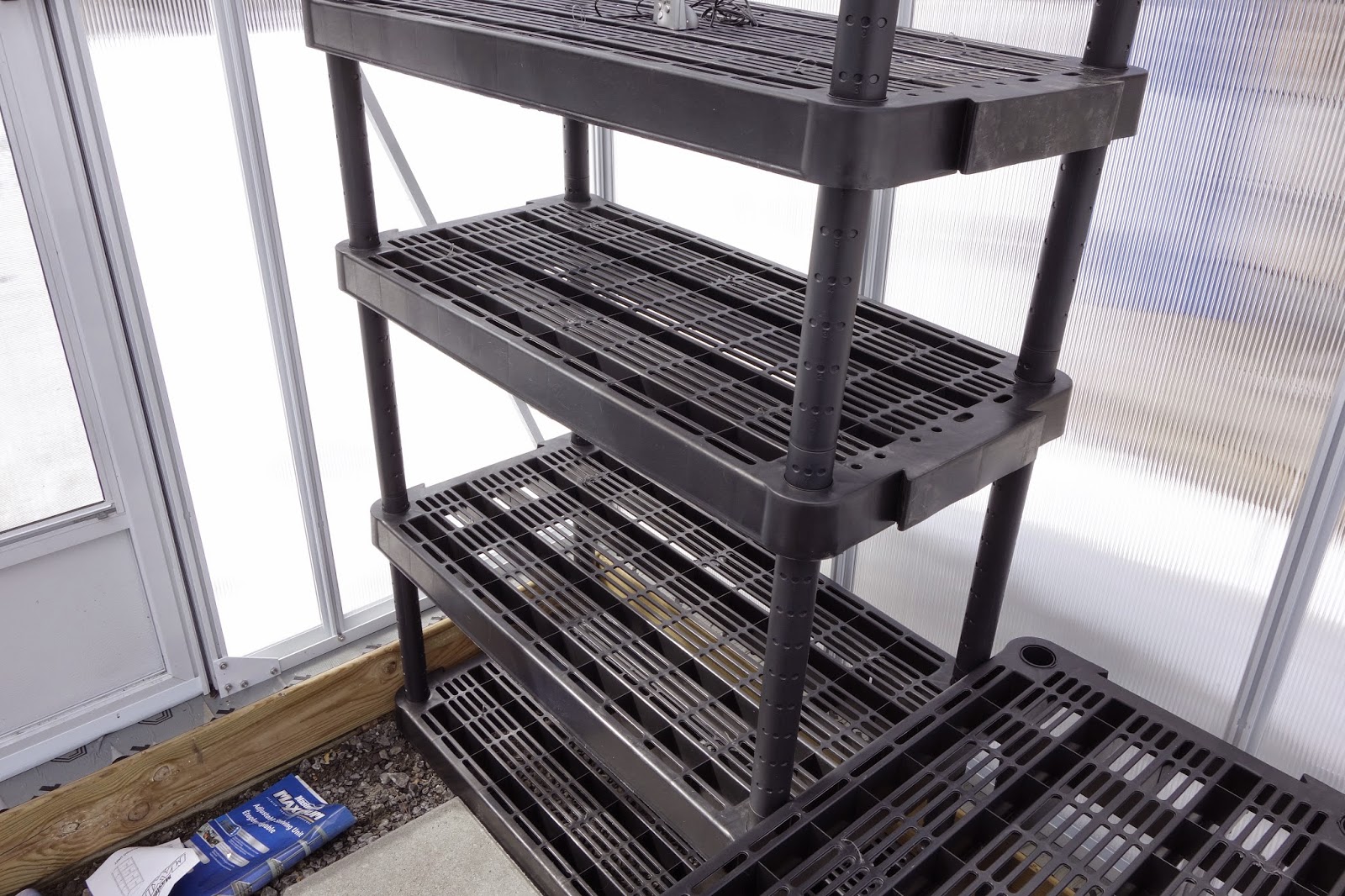 In the northwest corner will be a tall shelving unit that will likely be mostly storage for tools, gloves, etc.  But I won't waste space so will shove some plants in wherever they fit.  Then from west to east, the shelving gets lower at intervals. 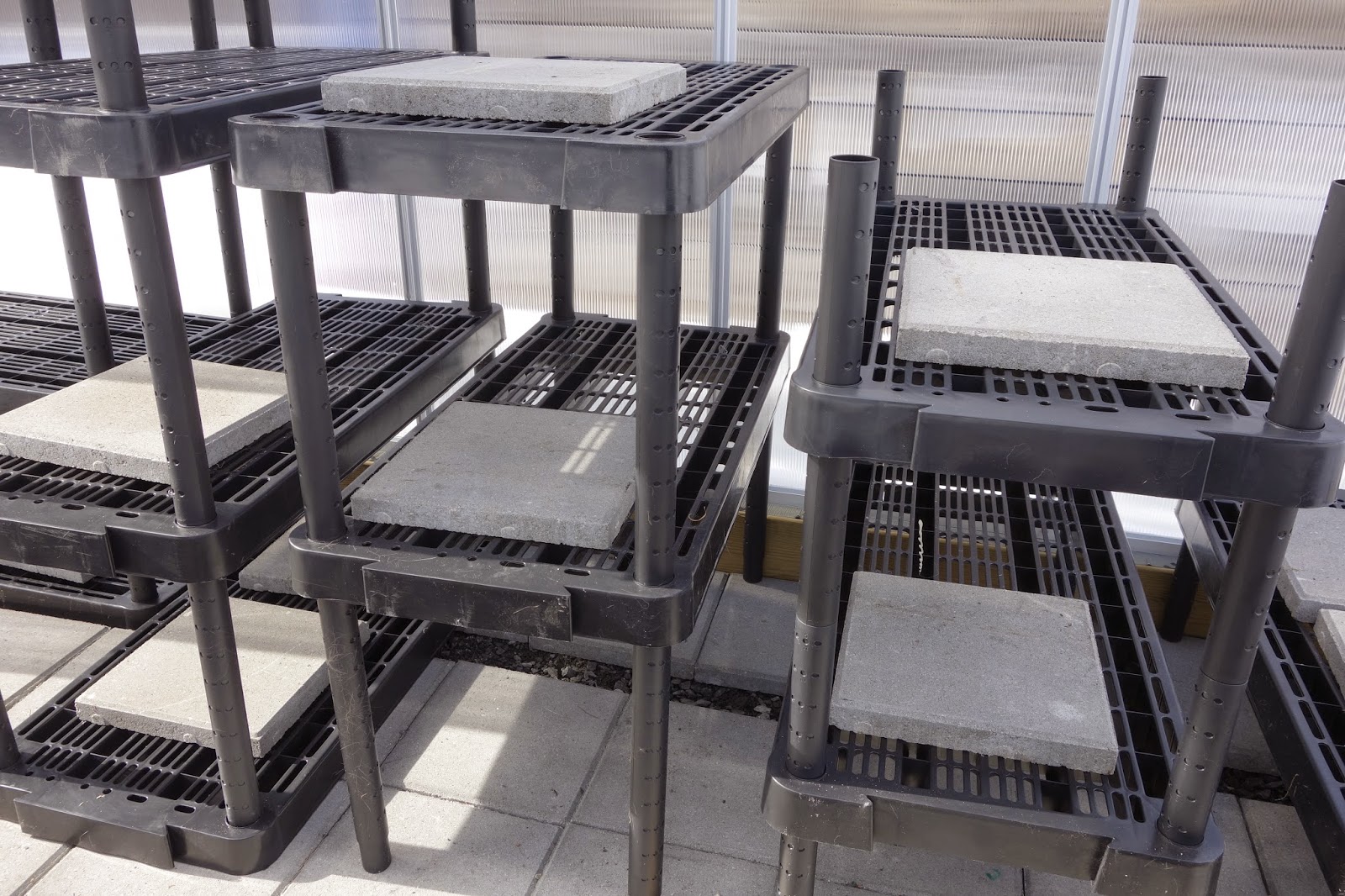 I haven't really figured out the rest ... the great thing about using the adjustable resin shelves is, well ... they're adjustable!  So we'll see what happens over the coming months and I'll change things to meet my needs.


*For anyone who hasn't watched The Red Green Show, the actual quote is: "If the women don't find you handsome, they should at least find you handy".