August Update on Cucurbits: Part One 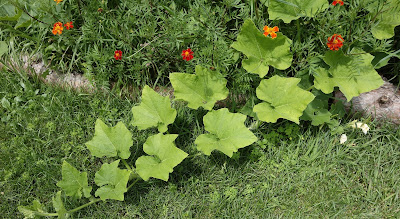 I have had a very rough go this year with the pumpkins and squash (both winter and summer).  First, I rushed into planting them too early in May during a wonderful warm spell then got hit with a late frost.  I covered all of the plants during the frost and I managed to save 2/3 of what I had planted (which was quite a lot).  Then I got a nasty infestation of cucumber beetles which managed to take down quite a few of the already weak plants.  The beetles mostly infected the summer squash, but also many of the pumpkins.

Several weeks of neem oil treatment and some manual picking of the bugs off the plants has made a considerable difference.  I still see cucumber beetles on some of the plants but those plants that survived seem to be strong enough and large enough to handle it (but I'll keep doing the neem oil treatments and pick off bugs when I see them).  I also have a lot of squash bugs but they don't seem to do as much damage.

I lost almost all of the pumpkin plants, and the watermelon and Hale's melon plants are growing but I've seen no fruit forming yet and are likely too small to produce anything in the short growing season I have here.  So here is a summary of what I have left.

In the three sisters garden space (NW of my yard), I planted the Marina di Chiogga, as well as spaghetti, butternut and acorn squash.  There is no evidence of acorn anywhere in this garden.  I have one spaghetti squash almost ready to harvest ... a good thing as it started much higher up on a stalk of corn and has slowly been dropping further towards the ground.  I probably should have managed the vines better so they didn't go up the corn. 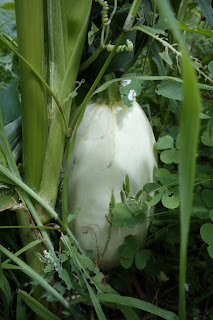 I have two very different looking Marina di Chiogga - one seems close to harvest but I've never grown these before so I'll have to do some research. 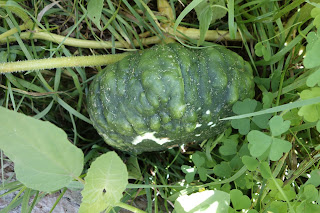 And finally some evidence of butternut.  I really struggled with germination and had several to plant but I think I lost most of them in the frost.  Not sure if this one will have time to get to full size but I'll take what I can get. 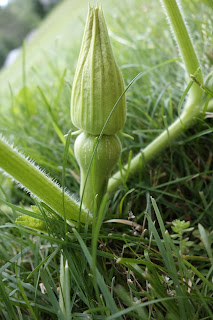 If it is not obvious, I'll point out that I seem to have, at best, one or two squash per plant.  A pretty crappy yield rate but at least I'm getting something!!


The next garden (NE of my yard) was also dedicated to Cucurbits including more spaghetti squash, acorn squash as well as the watermelon and Hale's melon that I previously mentioned.  Due to the large numbers of squash bugs that I had last year, I decided to put LOTS of marigolds and nasturtiums with the squash in this area in order to attract them away from the veggie plants. I may have overdone it as I planted dozens of them and they are all getting quite large and threatening to overtake the garden space (but are working very well at attracting the bugs).


The two spaghetti squash harvested this past Monday (one 5-pounder!) came from this area (probably the same plant), and I have another one growing here.  That little yellow flower behind it is from the watermelon plant. 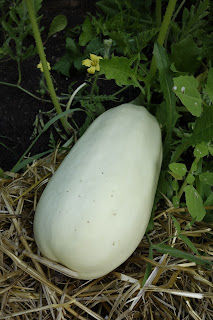 I also have two acorn squash. 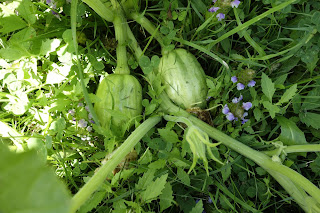 And then there is this mystery squash which I haven't quite figured out what it is yet. 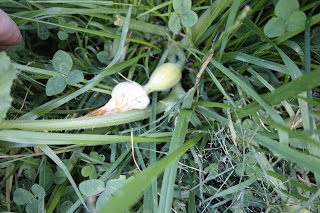