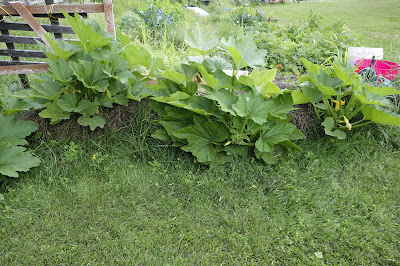 I previously described the state of winter squash in my two dug gardens.  This part two is pretty much all about the Cucurbits that I planted in hay bales.

Just beside the NE area garden where I have winter squash and some melon plants (along with an overwhelming amount of marigolds and nasturtiums), I have a number of hay bales, most of which are left over from last year (a couple of fresh ones).  In these are a bunch of the failed or barely hanging on pumpkin plants.  However, in the past week I am seeing a solid return to several of them which I suspect is a result of the neem oil treatments to manage the cucumber beetles that were killing most of them.   This one below (more marigolds and nasturtiums in the background so a bit hard to see) had been stalled at 8" tall for at least a month but has grown another 6" in the past week. 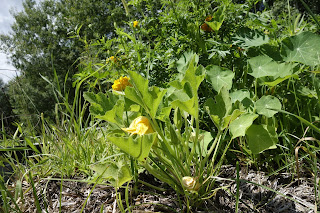 But I also have these two plants - one with a single fruit. 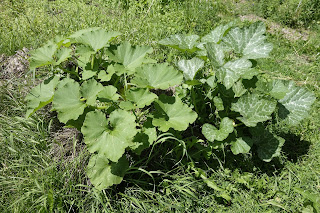 At first I thought it was a small pumpkin ... then I double-checked the photos of the zapallo del tronco (my seed packet calls them zapallito del tronco).  Depending on when they are harvested, they can be used as either a summer or winter squash.  Because I thought it was a pumpkin, it's been there for a while, so definitely will be used more as a winter squash (I picked it yesterday). 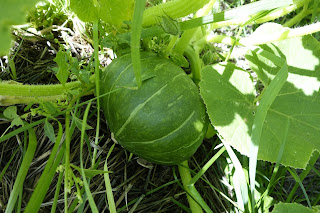 So my fingers are crossed that some of the plants previously mentioned will pull through and produce, but the following remaining squash and cuke plants in hay bales in the center of my  gardening space are already producing quite well.

Hmm ... except this mystery one which hasn't started to produce yet.  This one, in particular, had been quite damaged by cucumber beetles but has suddenly rebounded in recent days.  I know it is some sort of summer squash, just not sure what type.  Several of the plants are falling over from their weight.  In some cases, the hay bale is falling with the plant but sometimes I push the hay bale over a bit for fear of the root pulling right out (although that's unlikely as the roots are quite large and pretty imbedded in the bale at this point). 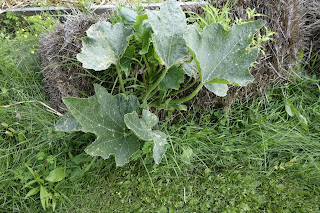 This one has already produced six or seven zucchini although I tossed away at least that many baby ones as the cucumber beetles did so much damage that they were rotting on the vine. 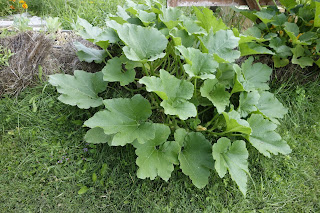 With several more on the way. 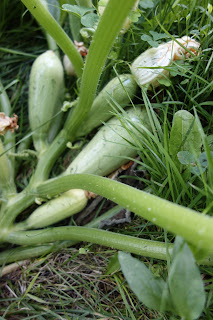 And the three shown in the main photo are all yellow crookneck squash.  The seeds I used were from a variety pack of summer squash that I get often from William Dam.  Fun when I get several different varieties in one growing season, but not so fun when 3 of the 4 are yellow crookneck squash!!  I've had a few already with many more again on the way. 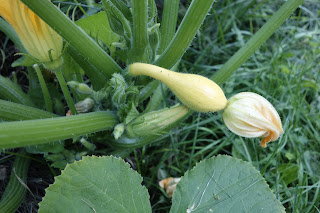 These cucumber plants (yes there are actually two there side-by-side in the same hay bale) were absolutely on death's door before the neem oil applications.  They aren't large and still look pretty weak but I just pulled two cucumbers this week. 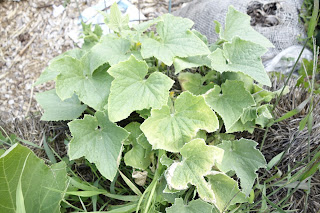 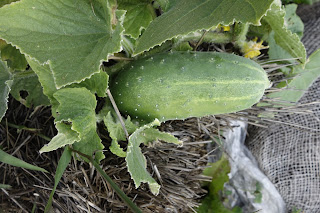 So though I lost a lot of plants to frost and bug damage, I am very satisfied with the amount of veggies I'm getting so far.  Not as good as 2013 but 100% better than last year (well, 100% on the summer squash as ALL of my zukes failed last year).

It was looking bleak just about a month ago and I really owe it all to the neem applications.  So thanks to everyone who talks about the use of neem oil on their own blogs or websites so others like me can learn some solid troubleshooting advice!