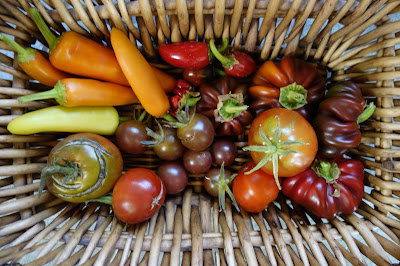 August is always such a spectacular month for harvests in my part of the woods ... although I don't necessarily get the yield that some folks have, I am certainly enjoying the variety this time of the year.  The photo above is a last minute picking of greenhouse plants ... various tomatoes and peppers.

Tomatoes include chocolate cherry tomatoes, Black Krim and Japanese Black Trifele.  The basket also includes Hungarian Hot Wax and Jalapenos and these are the last of the Pimiento sweet peppers.  I've removed that plant from the greenhouse creating space for other pepper plants that were in containers outside.

And I have a variety of squash and other cucurbits (including my first two cucumbers!) ... 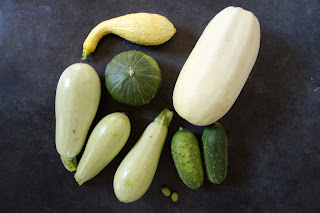 I will draw your attention to the 2 dots at the bottom of that photo and you will see mouse melons.  I have been trying to grow these, unsuccessfully, for 3 years. I keep trying as I desperately want to eat a bunch of these.   They look like watermelons and taste like a slightly sour cucumber.  I should have dozens by now,  but all I get is one or two.  But the plants are looking healthier than ever so maybe I'll get a big handful by the end of the season! 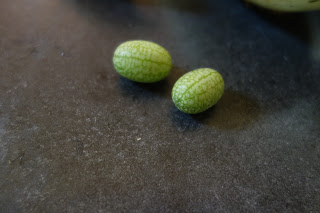 I finally got some arugula.  Early plants bolted so I am thrilled to finally get some of my favourite greens.   The basket also hold a bunch of basil.  I made an arugula-basil pesto. 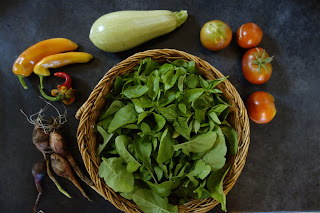 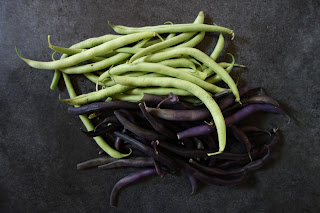 And my last harvest of the week is a result of garden maintenance.  The small onions were accidental during a bout of weeding.  And the carrots (rainbow mix), though not at all mature, were intentionally pulled as an exercise in thinning. 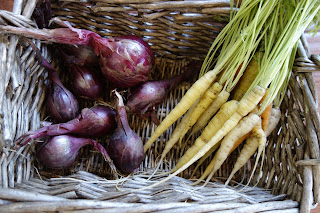 Thanks to Daphne at Daphne's Dandelions for hosting a weekly spot on what gardener's are harvesting, cooking (or even still planting!) this week.