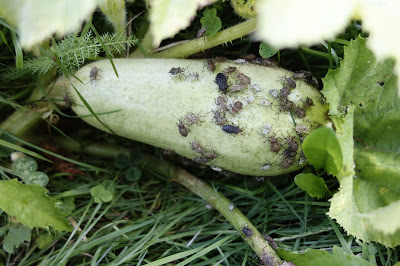 Arrghh!  I give up.  There are far too many of them now ... too many brown squash bugs.  I hate these things and there are just so many!  I would guess at least two hundred on this one zucchini plant alone. 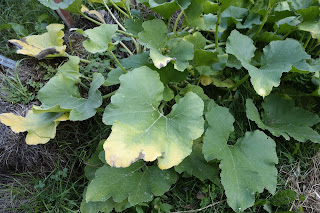 The neem oil treatment was working well for the cucumber beetles but didn't have much effect on the squash bugs.  I've had many squash bugs before, although perhaps not this many.  I generally found they were unable to do enough damage until late in the season when the plants are weakening on their own.  So I guess that is what has now happened with the cuke plants (I pulled them a few days ago) and now the summer squash. 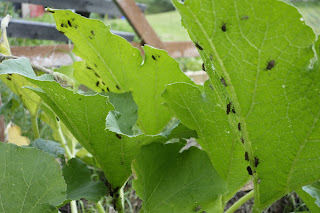 They are taking down one plant every couple of days (they inject a toxic substance causing the plant to wilt; this closely resembles bacterial wilt but has its own name: "anasa wilt" after their scientific name "anasa tristis"). 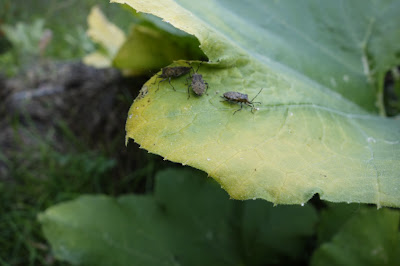 They can have the regular summer squash, I've had enough.  But they have now taken over the Zapallito del Tronco of which I've only had one.  There are two more on the plant but unlikely to survive as the plant is almost dead already: 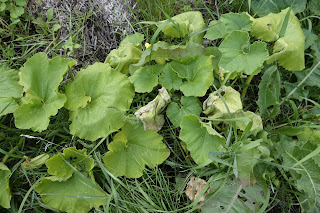 And it is right next to one of the few winter squash I have left, the Dickinson pumpkin plant.  I really hope that one lasts long enough to get one of the two pumpkins on the vine (but not counting on it). 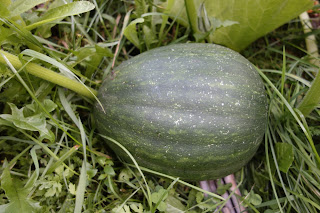 Winter squash are some of my favourite veggies to grow so I will be disappointed if I have to take a break even for a year.  I guess it's all about better pest management.  I wasn't killing them as I saw them as they didn't seem to do much damage, so I let them get out of control.  And I didn't know what the eggs look like but now I do.

In the meantime, I'll watch for the plant to die and remove it as quickly as possible (with bugs still attached) as far away as I can.  Then they'll move to this crookneck squash plant ... and I'll do the same (it's already showing signs of wilt in the upper leaves). 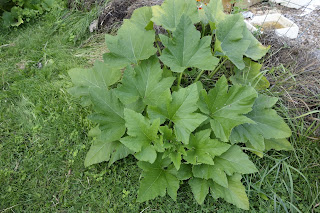 They overwinter so I can surely expect a big bunch again next year.  I will look more into companion plants to deter them (maybe dill or catnip, but the nasturtiums certainly didn't work this year!).  I can use diatomaceous earth to deter them and floating row covers will help.  And use plant resistant varieties (I've heard Tromboncino for summer squash and Moschato varieties of winter).

Either way, I don't think I can give up my winter squash so I'll have to figure something out ...