Potatoes in the Garden (and plant update May 1) 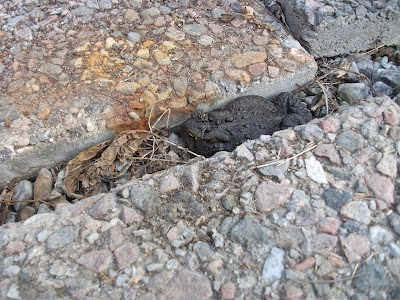 I was reorganizing the greenhouse and found this guy under a rainbarrel.  If anyone knows what kind of frog/toad he is, let me know.  I tried to find a way to identify frogs in Eastern Ontario but couldn't find a good website.

Meanwhile ... it is pretty safe to put potatoes out in the garden at this time, as it will take a few weeks for the plants to really develop.  If there is any chance of frost, it is easy enough to just pile extra soil on top to increase the warmth around the plant.  I had the opportunity yesterday evening to turn over the garden, so it was basically ready for planting.

I've grown potatoes for about 5 or 6 years now and have generally had good luck.  I say "good luck" because I've really never made much effort to prepare the soil properly or do anything other than hill up a bit as the potatoes grew.  So I did some research this year, and it seems fairly common to add bone meal into the soil where the seed potato will be planted to encourage root growth (due to higher levels of phosphorus).  Now, without doing a soil test, I don't really know if I need more phosphorus!!  But I couldn't be bothered to do a soil test, so I just added a little bit of bone meal into each hole.  What the heck! 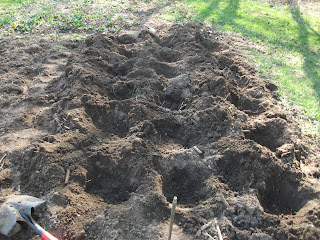 I dug holes about 8-10" deep (and about a foot apart where the seed potato is dropped), added 2 Tbsp of bone meal, dropped in the seed potato with the sprouts facing upwards, then topped with a few inches of soil. I will continue to pile on soil (or mulch) as the plants grow bigger until such time that they flower.  At that point, I pretty much leave them alone.  As there was only a few inches of soil, I did not want to create an opportunity for rot to set in, so just moistened the soil for now.  Potatoes need water, but don't like to be too wet, so I prefer regular short waterings.


I planted two rows of blue russians and 1 row of red chieftain (at least I'm pretty sure that's what I bought, I can't seem to recall right now). I was one short of the red variety in its row, so there is a single Kennebec potato as well.  I still have Yukon Gold and more Kennebec to plant, which will join the other potatoes already in containers in the greenhouse.


Many other plants are getting a chance to stretch out their toes as I spent an hour or so transplanting various types.  I still have dozens and dozens of seedlings in and around the house in addition to those already waiting patiently for their turn in the greenhouse.  The weather is showing approximately 10 degrees Celsius as the night temperature for the next week or so and I'll be going full steam each night moving plants into bigger, and in many cases their final, containers.  I realize a frost could still hit this month, so I'll just have to keep an eye on the weather and cover up if that occurs.


And some of the more challenging transplants have been put aside for another day ... 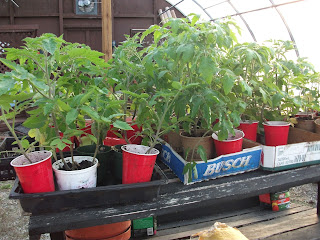