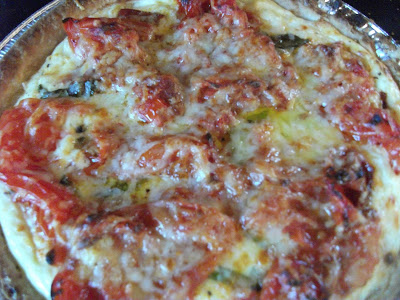 This is an easy way to use up some of that bountiful zucchini.  I used a combination: one eight-ball squash, one regular green zucchini and a large patty pan (I'm having a hard time keeping up with the harvest, and they are getting bigger than I normally allow).  My tomatoes are kicking in as well, and roasting tomatoes adds so much great flavour!  I've indicated 10-12 plum tomatoes which is an approximation of what I actually used: some plums, a few black krims and a handful of cherry tomatoes. 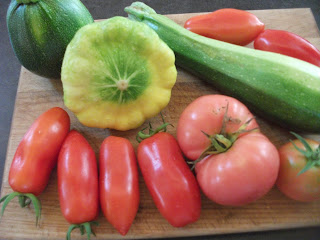 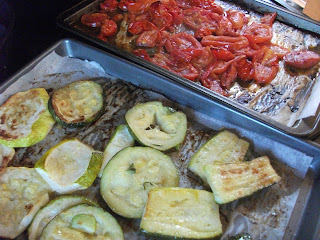 Slice squash into rounds about 1/2 inch thick.  Do same for tomatoes.  Keep the squash and tomatoes on different trays as the cooking time will vary depending on type and thickness.  Sprinkle each with salt and drizzle with olive oil.  Roast in 400 degree F oven about 45-60 minutes until browned; stir tomatoes, flip squash slices partway through.  Allow to cool slightly.


Reduce over temperature to 350 degrees F, and blind bake the pie crusts for 18-20 minutes.

Roughly chop the roasted squash, and stir into the ricotta along with the feta and parmesan (for a firmer texture, you can also mix in one egg).  Season lightly with salt.  Divide evenly between the two crusts.  Grind fresh pepper on top and sprinkle with chopped basil leaves.  Spread the roasted tomatoes on each pie, then the grated aged cheddar. 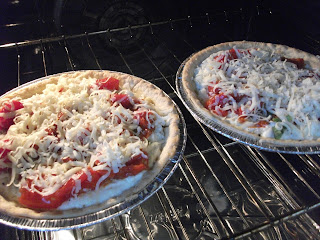 Bake at 350 degrees F for 35-40 minutes. You may need to cover the outer crust with tinfoil or one of those pie doohickeys to avoid burning. 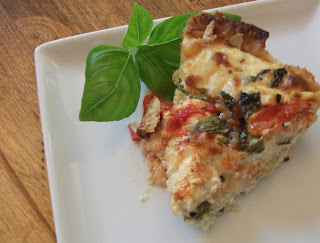