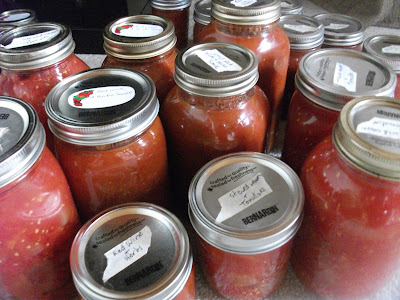 After my failure with the tomato plants this growing season, I still wanted to can some sauce for the winter so I picked up a bushel of tomatoes ... about 50 pounds. I popped into a market south of Manotick and asked if they had any deals on tomatoes; I ended up with a bushel of "seconds" at a lower price.  Seconds simply imply that they are the second choice for consumer displays as they contain some splits or blemishes.  No big deal, just cut out any bad pieces and they are great for sauce! 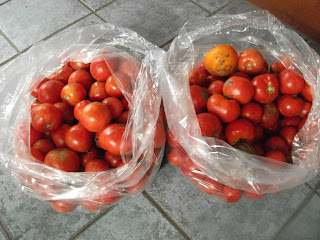 Many years ago when I first started making sauce, I was told by an Italian friend that it was a waste of time to peel tomatoes.  There are definitely some instances where it is proper to peel them, but with a cooked sauce, he said they just rise to the top while cooking and you can remove them with a spoon.  And that is how I always do it!  It's not perfect, but a lazy way that works well enough for me. 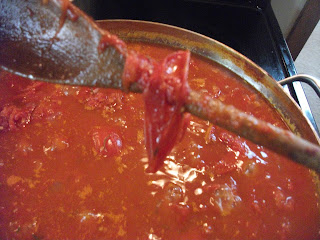 I put up three types over the past few days: (1) Red Wine and Herb Tomato Sauce which I make every year; (2) Stewed Onions and Tomatoes and (3) Paste.  The last two are really basic ... for the stewed onions and tomatoes, they are cooked just until hot then ladled into hot jars for processing.  The paste is simply tomatoes that have been whizzed in a food processor, strained to remove seeds and cooked down to a thicker sauce / paste that I will use for pizza sauce or as a flavouring agent in stews or other sauces.

For the Red Wine and Herb sauce: 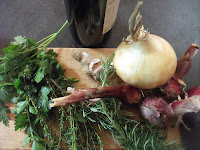 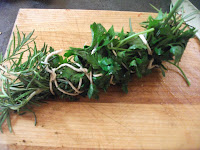 Saute onions and garlic in a 6-quart pot. Tie up as many herbs as you can with cooking twine (or wrap in a coffee filter) and add to pot. 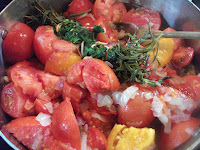 Fill up the pot with tomatoes; the rest of tomatoes will be slowly added as the sauce cooks down. 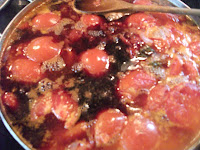 About two-thirds of the way through tomatoes (and when there is room in the pot), add the full bottle of red wine.

Keep adding the rest of the tomatoes and cook until it is ready to use in a dish ... no point in cooking it again later, it should be ready to use out of the jar.  I do NOT season with salt; best to do that during its final use.  I often use this sauce on its own with pasta (great with sauteed mushrooms) or as a flavourful sauce added to lasagne.  Should make about 5-6 litres.  I use a combination of litre jars and 1/2 litre jars for processing. 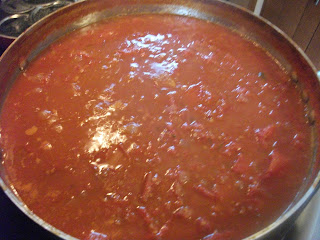 Pour into hot, sterilized jars and process with your usual canning method for tomatoes.  I do not want to give advice here about how to can sauce ... although I've only had 3 or 4 issues in over a hundred jars, there are some risks associated with home canning so best to check with an expert.  In order to increase the acidity, I squirt some lemon juice into each jar just before putting on the lid.