The last of my summer squash plants was struggling along with one more green zucchini on it until last night ... when the plant died.  It was not quite cold enough for a frost, but the temperature dipped down to 4 degrees C, and I think the plant was so exhausted it just gave up (I swear it was perfectly healthy yesterday). 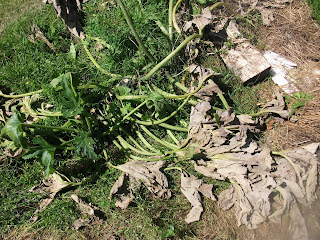 But overall, it was an incredibly prolific year for summer squash - not only have I stored a lot of grated zucchini for use in the winter, I've made many dishes (including one of my favourites: Zucchini Malai Kofta) and have also given away bags and bags of various summer squash to city friends who don't have their own gardens.  So a good year so far!  In fact, too good at times.  But I'm not sure staggering the start of the plants will make much difference?  It's a short season, so I've got to get them in as early as I can - I'll have to do some research on that over the winter.

In fact, I just made another zucchini dish (since I just followed someone else's recipe, I didn't bother posting this, but it's really delicious and moist, and I highly recommend it):  Cinnamon Sugar Zucchini Coffee Cake.

The winter squash has also been very healthy this year.  I have already started to harvest the acorn and butternut squash as you can see in the main picture above, and there are many still growing (Note: the picture has some cantaloupe as well, don't start thinking I'm growing some crazy strain of squash!).

I think I picked this batch of acorn squash a bit early. For some reason, I never bothered with the "fingernail test" when I grew butternut previously, it just seems obvious from its colour.  And the colour of the acorn squash made me think it was ready.  But the skin isn't as tough as it should be.  So I'll use this batch up or give some away, and I'll be sure to harvest the rest of them only when the skin is tough enough, otherwise they may not store well.