How to Plant Rhubarb


Okay, ha ha, I don't really have any business explaining how to plant rhubarb when I've just done it for the first time earlier this evening!  But I researched many, many websites for instructions and they are all very similar. I think I'm being pretty honest on this blog about what I know and don't know (much more to the latter) so I hope someone corrects me if I've really made a boo-boo!

So here's what I did with the "Canada Red" rhubarb crown I had purchased a few weeks ago.


Pick a spot with sufficient sun (the websites differed on what was sufficient; some said full sun, some suggested afternoon shade was helpful), then dig a hole that is about 2' deep and 2' in diameter.  If you are planting more than one, dig the holes at least 2-3 feet apart. 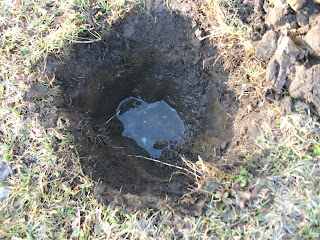 Add water to the hole.  In my case, I have heavy ground water (both naturally and from a recent rain) so within a few minutes of digging the hole, it was already wet.  I do hope it won't be too soggy as rhubarb won't like that (UPDATE: that is way too soggy, I moved it to a drier location). 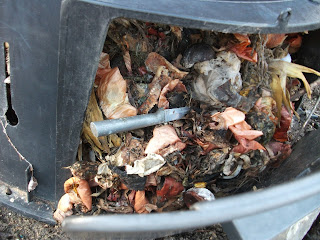 Add some manure or composted material.  I decided to check out the compost left behind by the previous owners, and this is what I found.  Yes, that is a knife (which I left there, by the way, guess I need to do a bit of work in the compost area soon).  So yeah, not so useable.  I guess they were in a rush and threw out the knife along with the veggie peels. 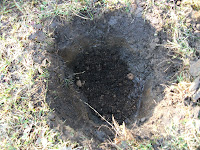 Instead, I added a bit of the black earth I've purchased which is supposed to contain organic soil additives. 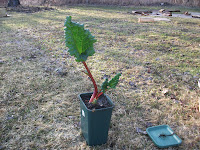 Remove the plant from the pot (be careful not to nick the stalks already growing) and set it inside the hole.  The top bud should be about 2 inches below soil level. 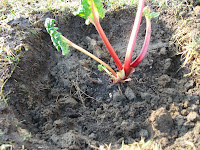 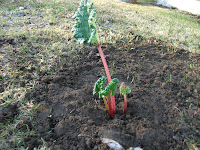 Fill in the rest of the hole,  covering up the crown and ensuring the plant is firmly set while doing so. 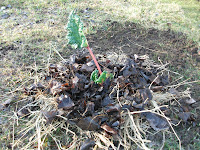 Mulch around the plant (I used hay, then also decided to add some leaves).

Another contradiction in the various sources of information is whether or not to harvest the first year.  The instructions provided with the plant I purchased suggests the stems CAN be harvested the first year, though most other sources indicate otherwise.  I will be very tempted to do so, but I think I will refrain from picking any rhubarb this year to ensure a hardy growth for the long-term.

I also plan to purchase another rhubarb plant (or two) locally when available.  Not all rhubarb tastes the same, and I'll want to ensure I have a bit of variety.