Peas and Potatoes in Containers 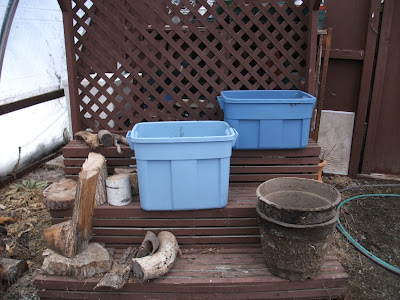 Peas are a cold weather plant - meaning to say that they germinate well in cold or cool soil and grow well in cool temperatures.  I've never grown peas before, and will be trying them in a container this year.  I've researched various plastic containers for use in vegetable growing and there is much debate.  The most common references I have seen are to avoid plastics 3, 6, and 7.  All of the rubbermaid-type containers I have on hand are a 4.  It's the same type of plastic used in bread bags, for frozen food, and for bags used in compost bins (at least according to this Good Housekeeping web page: The Daily Green).  I certainly don't believe everything I read, but I am willing to take a chance.  Besides, unless you've grown your own vegetables your whole life, it is likely that we have all been slowly absorbing cancer-causing agents through plastic wrap and plastic packaging (either during transportation or for display) at our local grocery stores (as well as microwave ovens, mobile phones and who knows what else)!  So what the heck ... 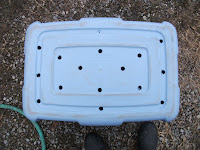 Step 1: Drill some holes in the bottom for drainage (the first container I prepared was drilled with 1/4" holes; but I switched to a 1/2" drill bit which made it much faster and they are a reasonable size). 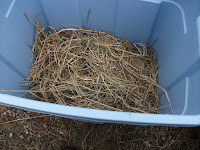 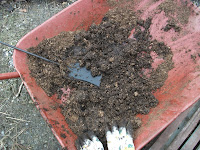 Step 2: Add a layer of hay or other mulch (I do this mostly for filler and to help retain water - from what I've read, hay is more dense than straw so should work like other mulches in this aspect). 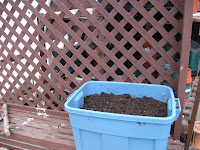 Step 3: Then I add my pre-moistened soil mix.  I haven't been gardening long enough to develop a particular mix of soil, but I do add in some peat moss to lighten the black earth that I have on hand.  According to articles I've read, peat moss can be acidic, and since peas prefer a more alkaline soil, I've added less than I usually would.  Then the peas are just popped into the soil near the surface, but covered with a sprinkling of soil.


I've put the container with peas near a trellis so the vines can climb.  The variety is Sugar Ann Snap Peas. 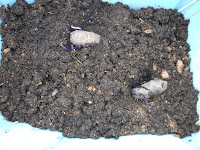 Potatoes prefer a more acidic soil, as do most garden plants.  So for the soil mix here, I used about 40% peat moss to 60% black earth.   I followed the same steps for the potato containers as with the peas - drainage holes, hay, soil mix.  But where I had filled the container near to the top for the peas, I have left the potato containers at a low level. 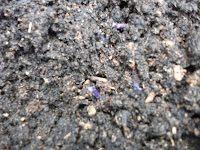 The potatoes are planted into the soil, and lightly covered (in fact, the seed potatoes I was using were sprouting well already, so I actually left a bit of the sprouts sticking out from the soil).  As the plants start to grow, I will continue to pile soil up and around the plants (called "hilling").  I might also use hay for hilling as potatoes will grow in many mediums, not just soil.  The potatoes must be covered with something when they begin to grow.  You know how potatoes from the store will turn green after prolonged exposure to light?  Well that happens while they are growing as well and it can be somewhat toxic. So keep hilling up around the plants to ensure the potatoes are covered! 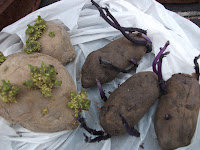 I've only planted a small amount of potatoes for now, and have dozens more to go.  Today I planted a few Russian Blue and a couple of Kennebec.  I also have Yukon Gold and Red Chieftain still chitting in the house.


I've placed the potato containers with the peas, just to keep them off the ground as the temperature is supposed to be at freezing again tonight.  But at some point well before they are filled with soil, I will need to find a more permanent location as the weight will make the containers difficult to move.