As noted on my March 24th post,  just 10 days ago I planted a number of cucurbits: cukes, melons and pumpkins.  Although still very small, they look healthy, even those from last year's seed.  But I really struggled with growing them last year.  Mind you, I had planted them in a new area which was poorly dug (rototiller died part way through, so I just shoveled a hole or two and plopped them in).  The ground was not loose at all, so I suspect that was part of the trouble.


I have read a few times now that nobody grows pumpkins indoors, but I was disappointed last year when the pumpkins did not seem to have the necessary time to grow.  I'm considering having just one plant inside the greenhouse.  I understand that for many of the cucurbits, I will need to hand pollinate; this apparently involves rubbing the male stamen onto the female stigma.  Some people use a paint brush ... hmmm.

Other plants are still doing well.  I rearranged all of the plants boxes to try getting a handle on what I have and what I need.

TOMATOES (I also have some Amish Paste buried somewhere)


ONIONS - assorted (I really need to transplant the rest of these, the newly transplanted onions look SO much better) 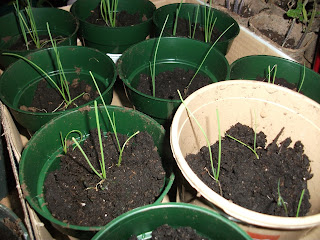 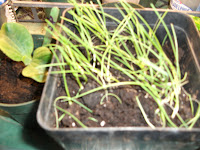 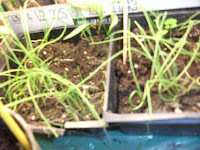 Assorted HERBS (the thyme and rosemary are too pathetic to show, but as straggly as they are, there are at least 10 of each so I might get something yet)