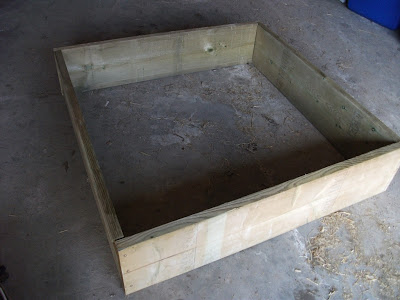 Earlier this week I purchased the items needed to build 3 simple 4' x 4' raised garden frames - pressure treated 2"x8'x12" lumber ($20 each) and some wood screws.  I expected it to be somewhat difficult as I'm not a particularly handy person (insert Red Green joke here), but it turned out a bit harder than I thought.  But I persevered and managed to get a semi-solid frame.  Here's how it went down ...

I bought a drill not long ago.  I mainly was looking for a drill to make holes in stuff.  I wasn't really thinking about drilling screws.  The drill came with an assortment of "screwdriver heads" (not sure that's what they are referred to, but that's what I'm going to call them).  I figured it came with all the basics, so I picked one that seemed best suited.  I should have known better; it's not as if I haven't used a screwdriver before, so I am well aware that there is a different head for each type of screw.  However ...

5) I started to drill in the wood screws with the wrong head.  Not only did the screws not get very far, as I was obviously stripping the head, but I was also on a funny angle (problem #2 - need to figure out how to drill them in straight). 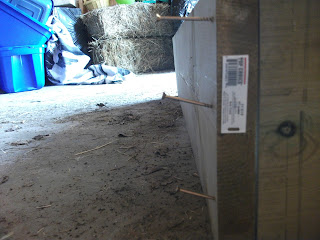 Once I realized I needed a square head, I remembered that I had one in my cordless screwdriver set.  But it quickly got mangled, as it must not have been the right quality - problem #3.  I finally understood what was wrong.  I boogied down to Crappy Tire and picked up a square screwdriver head for drilling into wood and was on my way.
With the right equipment, the screws went in faster so they were easier to keep straight (sort of), but it was still harder than I thought (the corners didn't exactly have a tight fit). 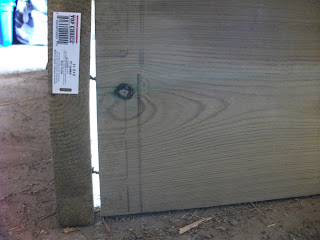 It all went together in the end, albeit a teeny bit wobbly.  Maybe it's just because I didn't (intentionally) use any bracing at the corners.  Good enough for now!  I think I'll wait to do the other two frames until I can get some advice on how to make it stronger (or maybe just get some help altogether!).

I put down some cardboard underneath to keep the weeds and grass from coming up (it might be a few weeks before I can finally get some soil delivered). 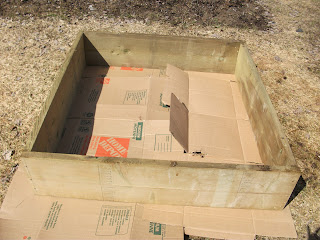 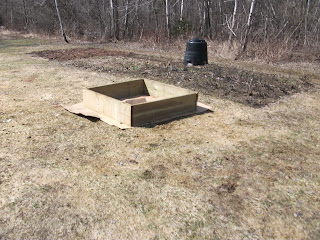