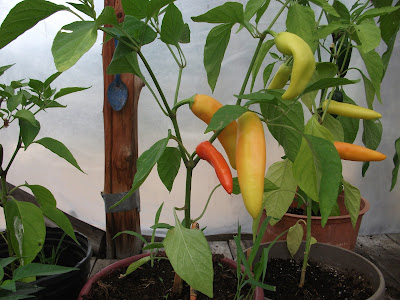 I've been growing Hungarian hot wax peppers for a few years now, using William Dam seeds.  They are awesome for pickling, where I usually mix them with jalapenos (sliced or whole).  There is a forum that suggests many people can easily mix up Hungarian hot wax with sweet banana peppers, and that some seeds are often mislabeled.  It doesn't seem very confusing to me, they are quite different.  I have grown both in the past few years. Here are the two photos that I took off the William Dam website (Bill, please tell me to remove the pics if this is weird).


Yet someone on this Gardenweb Forum has suggested otherwise - OK, maybe when they are in a very immature stage on the plant, but hardly an issue when they start to mature.  This individual also suggests that Hungarian hot wax grow upwards, and banana peppers grow downwards.  He shows a picture so it's hard to argue - again, maybe when they are not yet mature. The picture at the top of this post is one of my hot wax plants from last year, and they are clearly growing in the normal direction of gravity (admittedly, a couple are kind of sideways).  I'll be paying close attention to these peppers as they grow to see if they do, in fact, grow upwards in some early stage of growth and will happily share the pics if that is the case.  Which could be soon.  Check it out!  Two plants are already blooming. 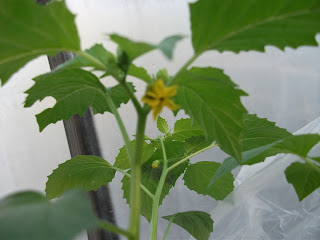 I started them indoors on February 2 in peat pellets in a jiffy "greenhouse".  I then moved the seedlings (pellet and all) into 3" peat pots (opened up the fabric around the peat pellet to facilitate root growth) about 10 days later. Then transplanted again around mid-March (I can't seem to find my notes) into 750 ml yogurt containers or something similar.  Next step will be the move into 1 gallon pots for the rest of the growing season.