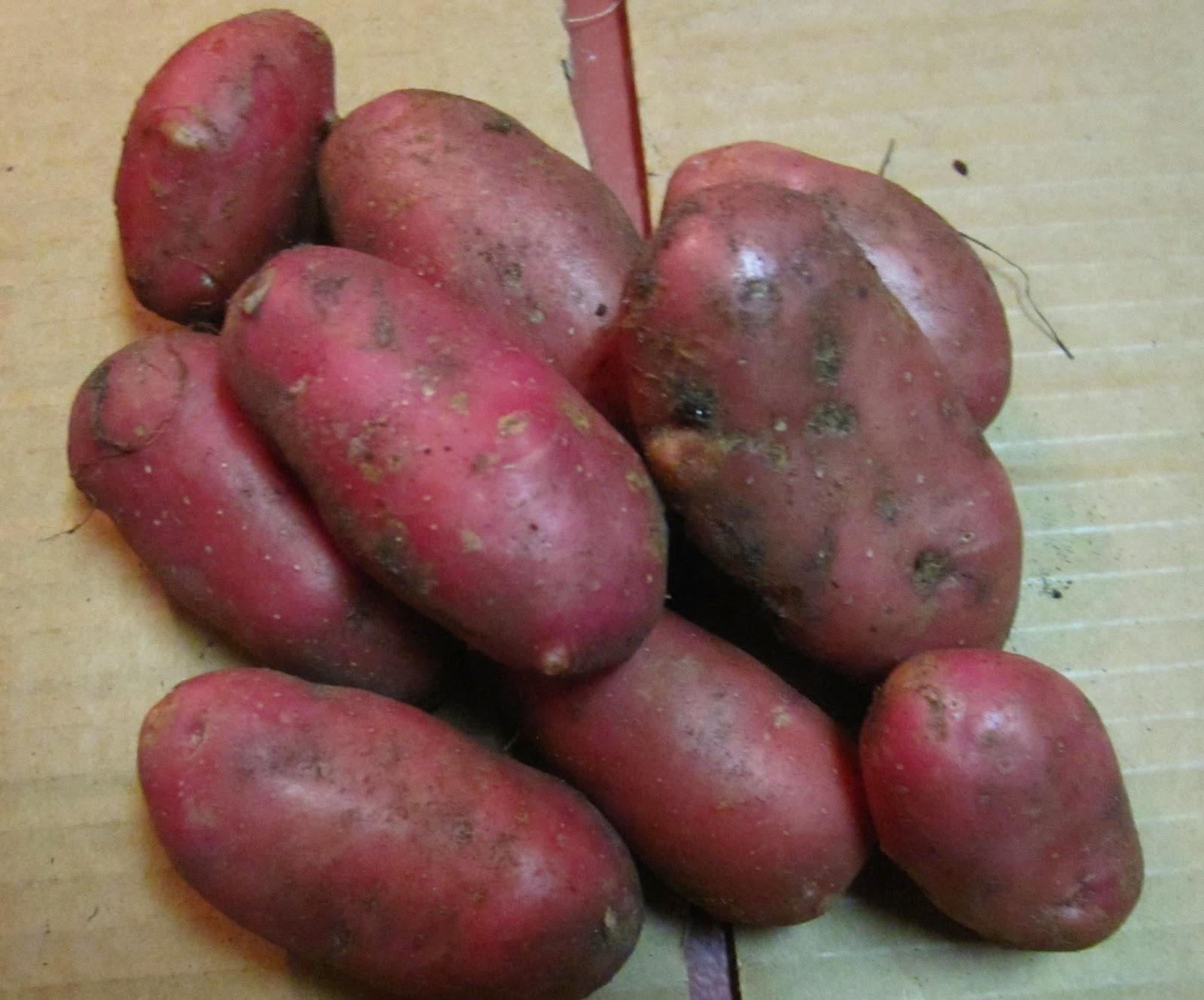 I finally got around to clearing out the rest of the plants, many of which are spread out on newspaper in my basement to dry out the skins a bit before packing them up for storage (some are already in the cold room).  I still need to turn over the potato garden for leftovers I may have missed and there are a few volunteers in the tomato garden from last year - but there shouldn't be too many left after this. 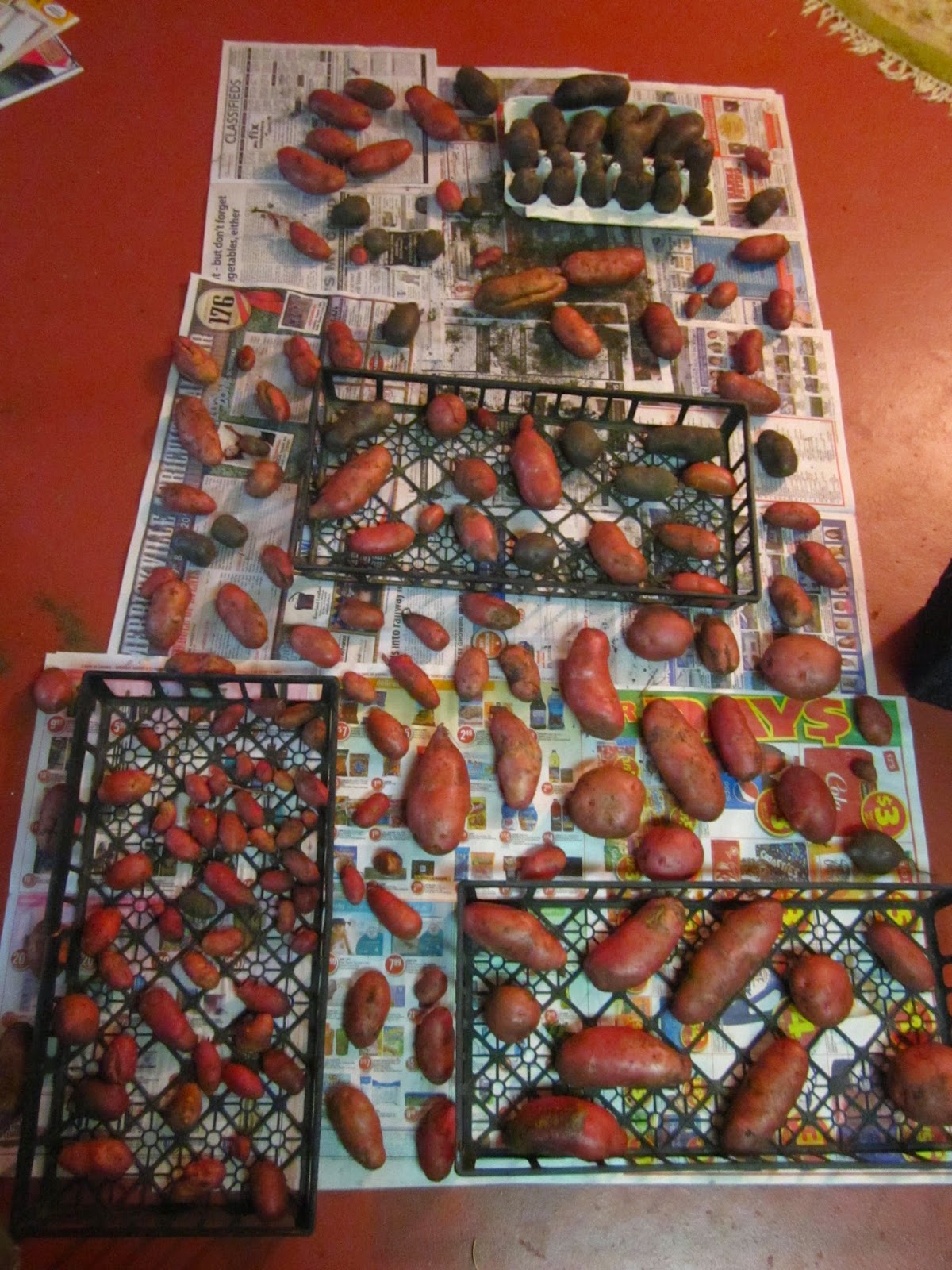 I harvested about 20 pounds of potatoes a couple of days ago.  Unfortunately, about a quarter of those had been nibbled on - voles, I suspect.  In fact, I chased a vole around the garden Friday morning trying to drown it with the hose but it disappeared down a hole.  I imagine there are hundreds in my yard. 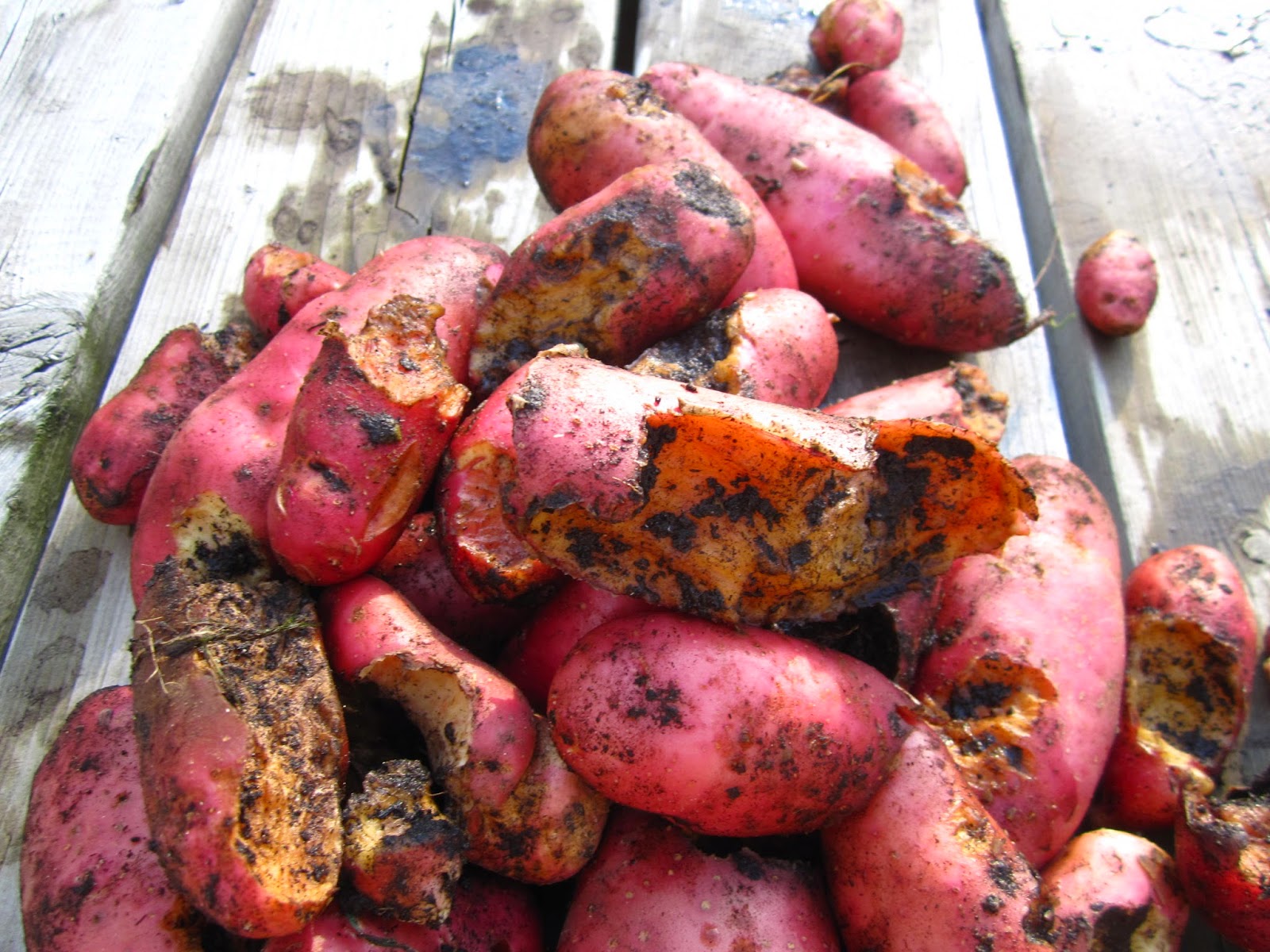 The potato plants had died off and fallen over a couple of weeks ago but I just had not gotten a chance to pull them until this past week.  I really wish I had gotten to them sooner as the remaining crop was my beloved fingerlings!

Over the past month or so, I have been harvesting a few pounds of potatoes each week; mostly blue russians (I have no idea why I planted so many of those), as well as a smaller amount each of red chieftains, kennebec and yukon gold. But the remaining dozen or so plants were the fingerlings.  The first plant I pulled was almost perfect.  Almost 5 pounds from the one plant which is quite a large yield based on my personal history of growing potatoes. 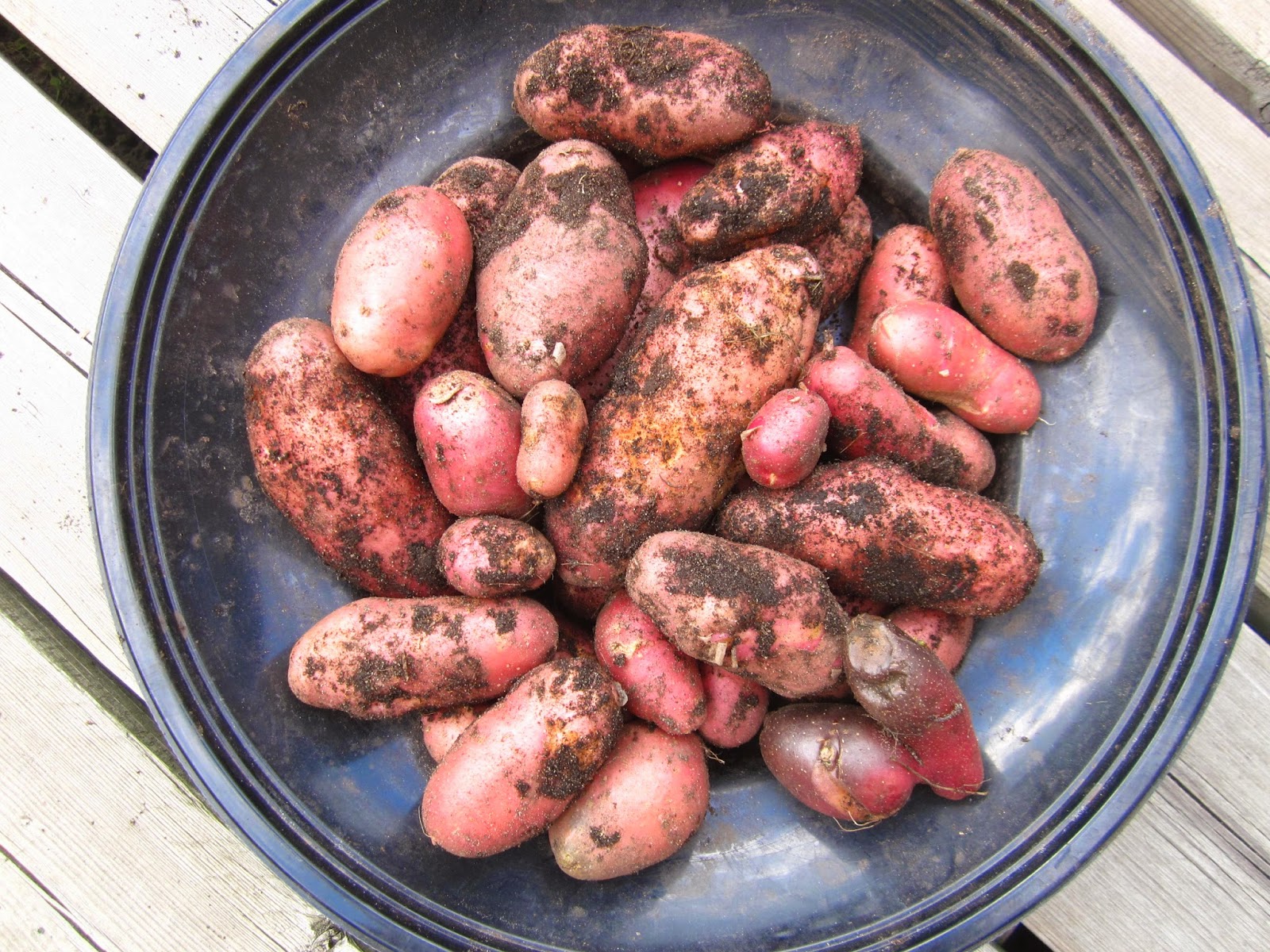 As I pulled the next couple of plants, there were not as many potatoes.  And the potatoes there were had been nibbled.  Some were left with nothing but a partial skin.  They have been dumped into the compost (about 5 pounds worth in total). 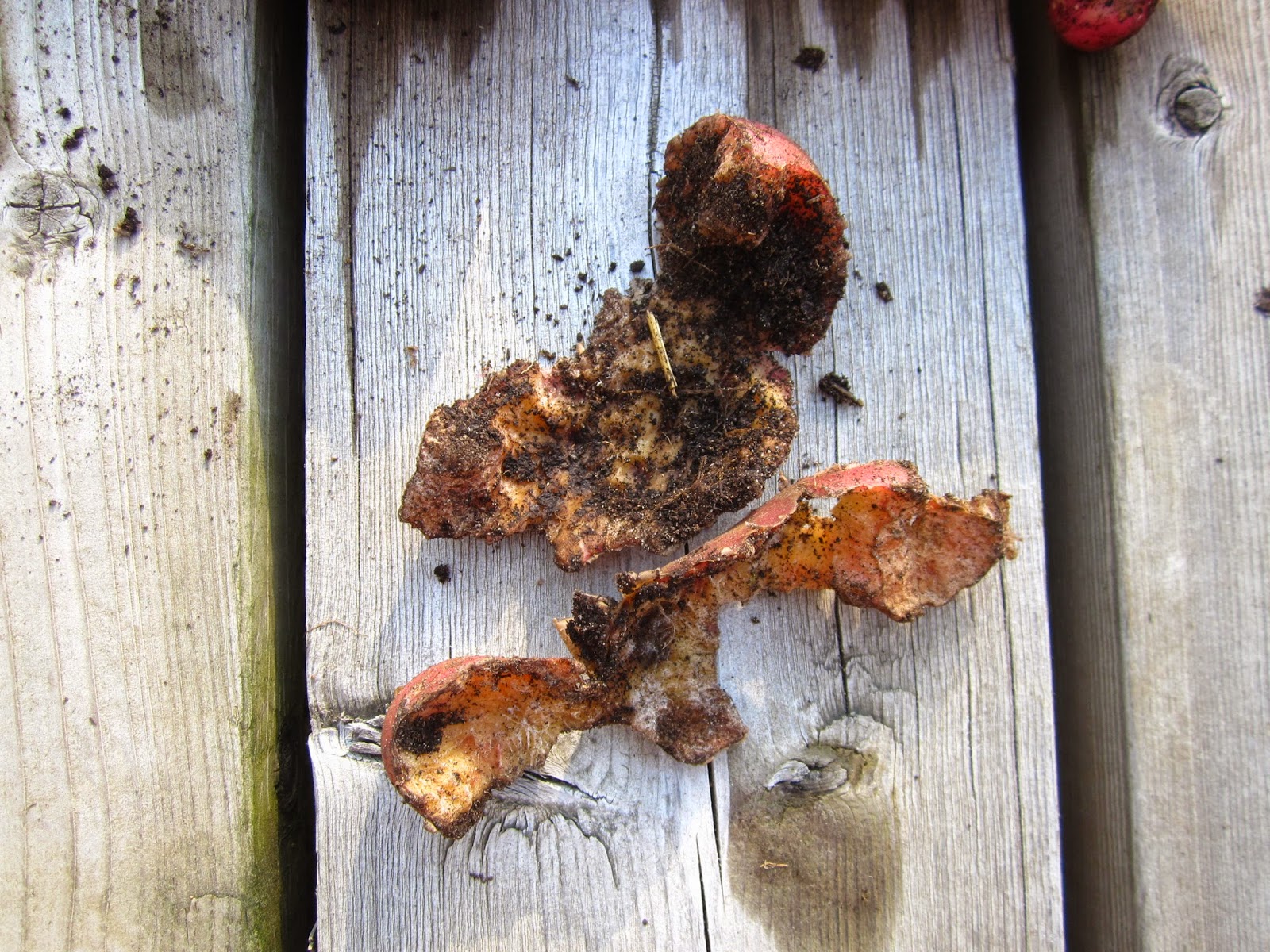 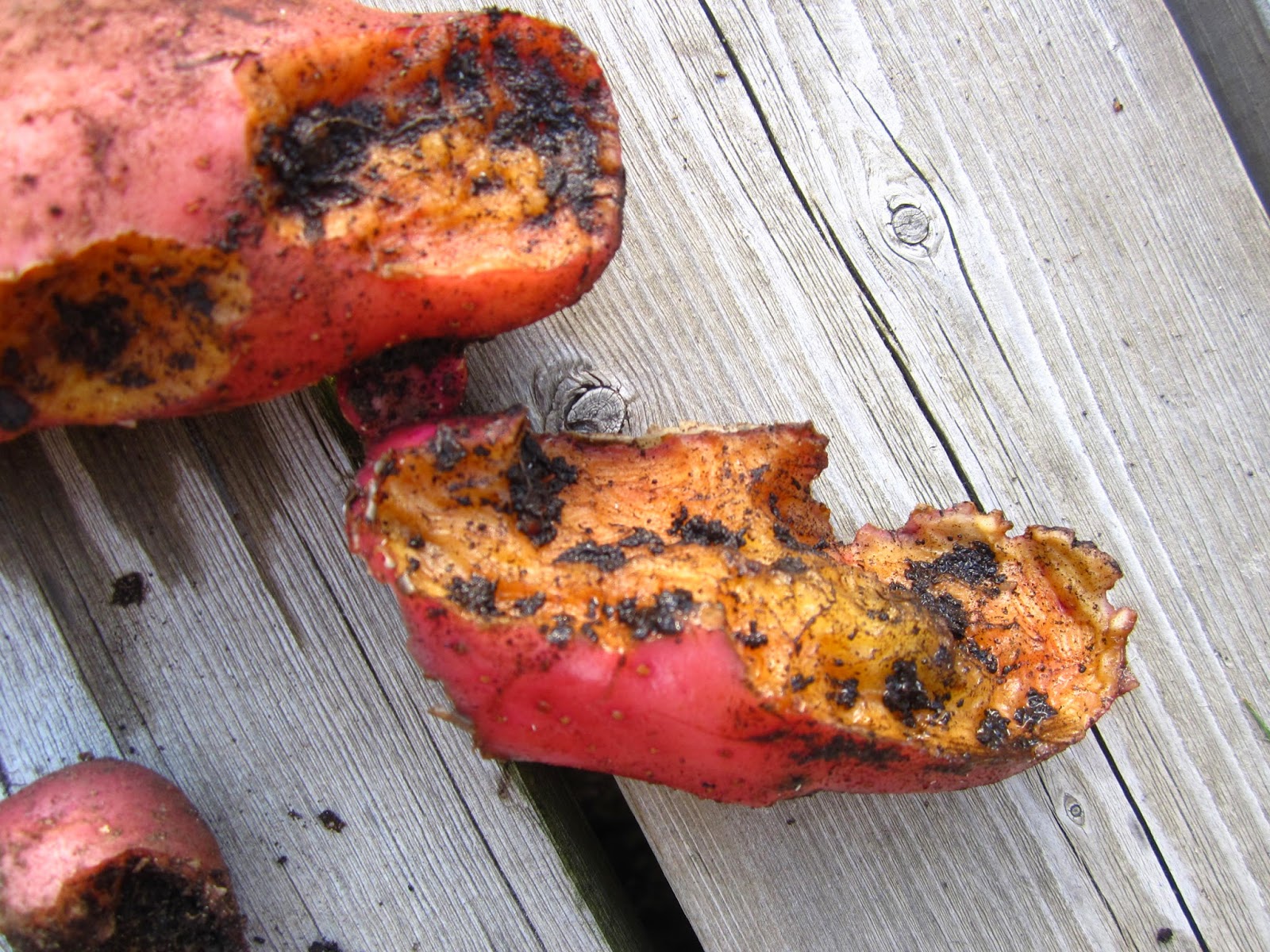 I also noticed that many of the plants had been uprooted already.   A number of potatoes still attached to the plants were now lying on top exposed to the sun.  These have also been discarded as they are discoloured and I want to avoid any toxins. 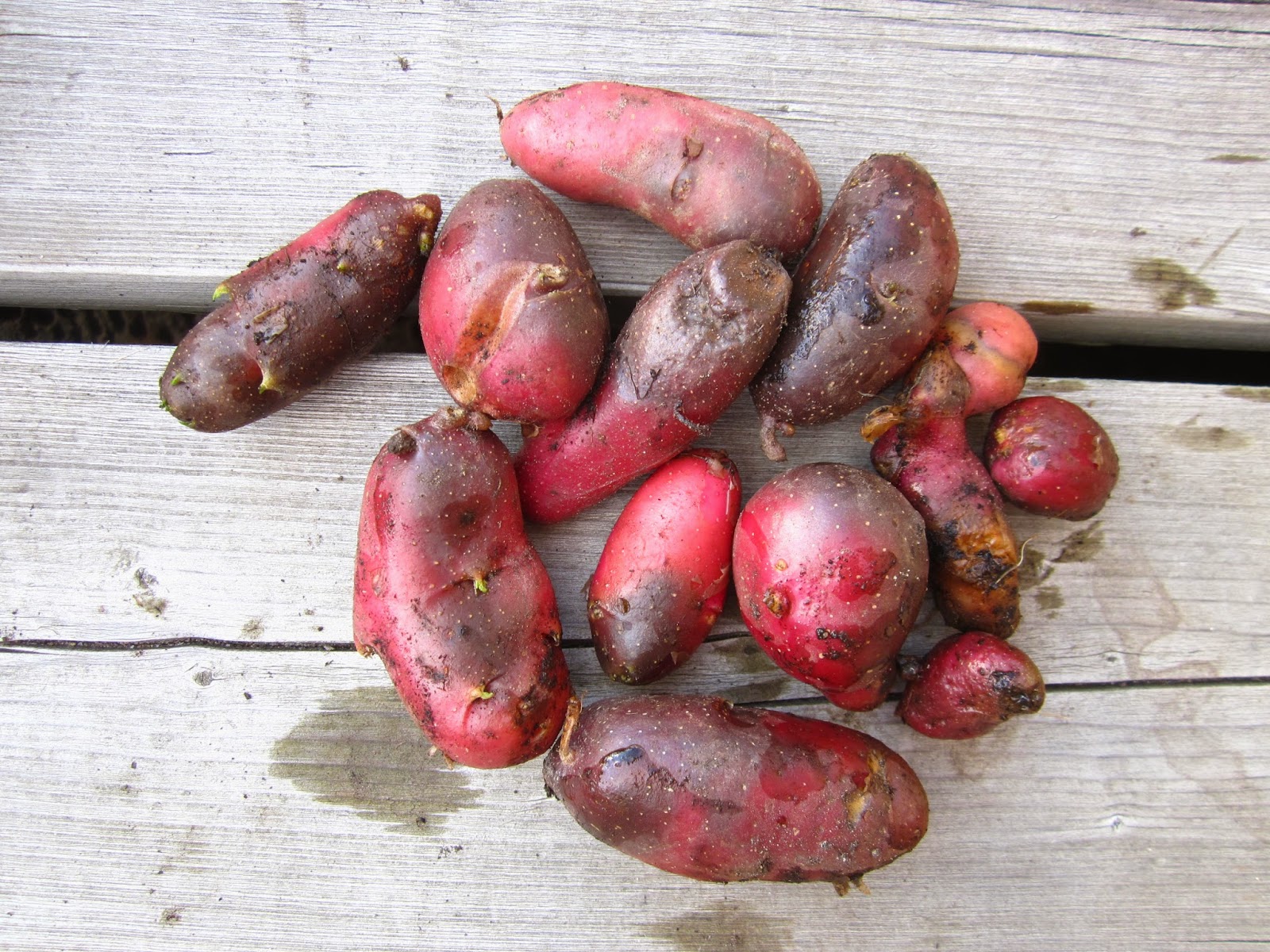 Some had even started to sprout (in a weird way): 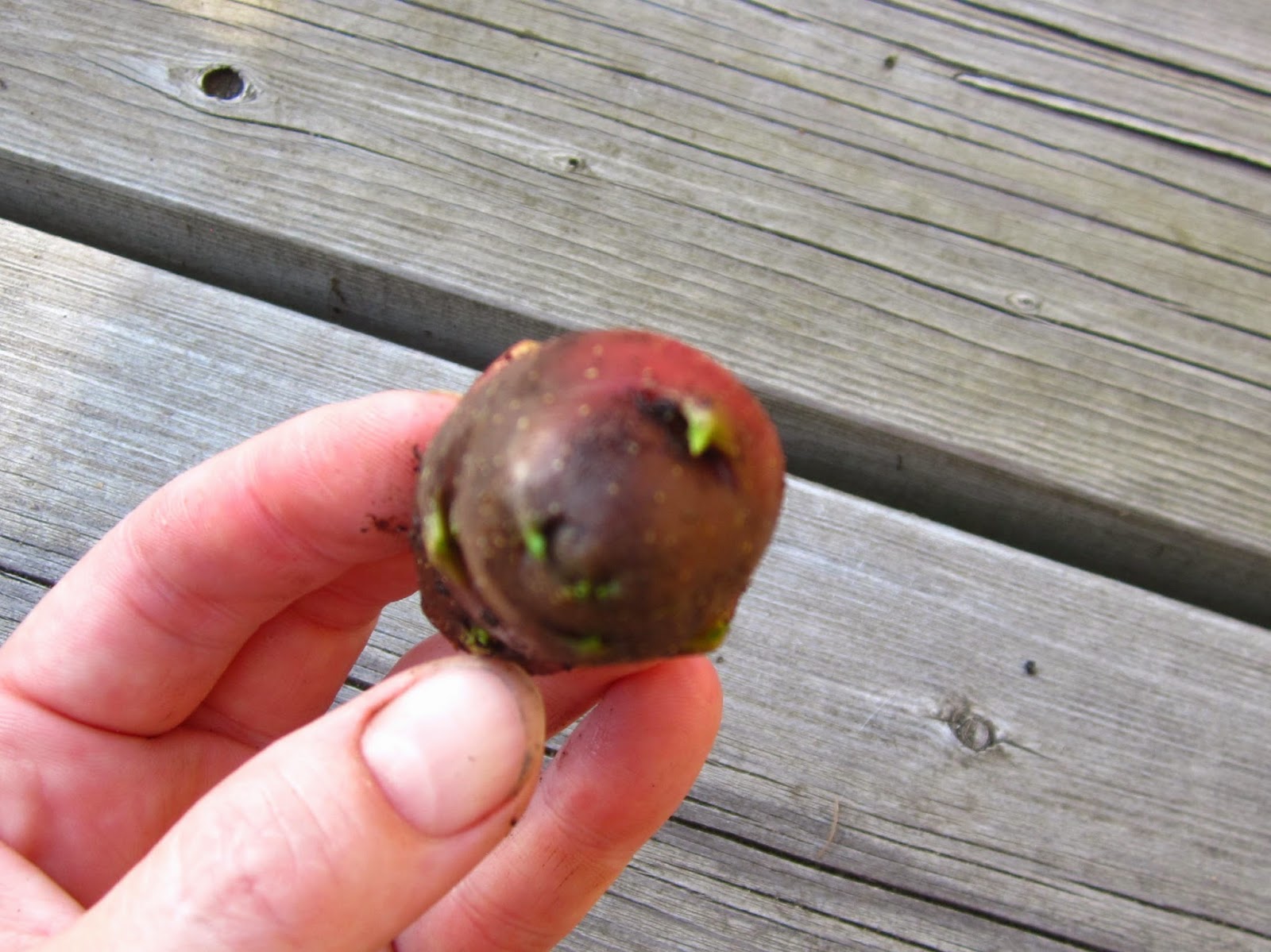 In the 10 years I have been growing potatoes I have never actually had a really deformed one.  But I had a few nifty ones this time around.  Where I used to live, the agricultural fair offered prizes for the vegetable most resembling a person or animal.  I think this one looks a bit like a hippo with a ponytail: 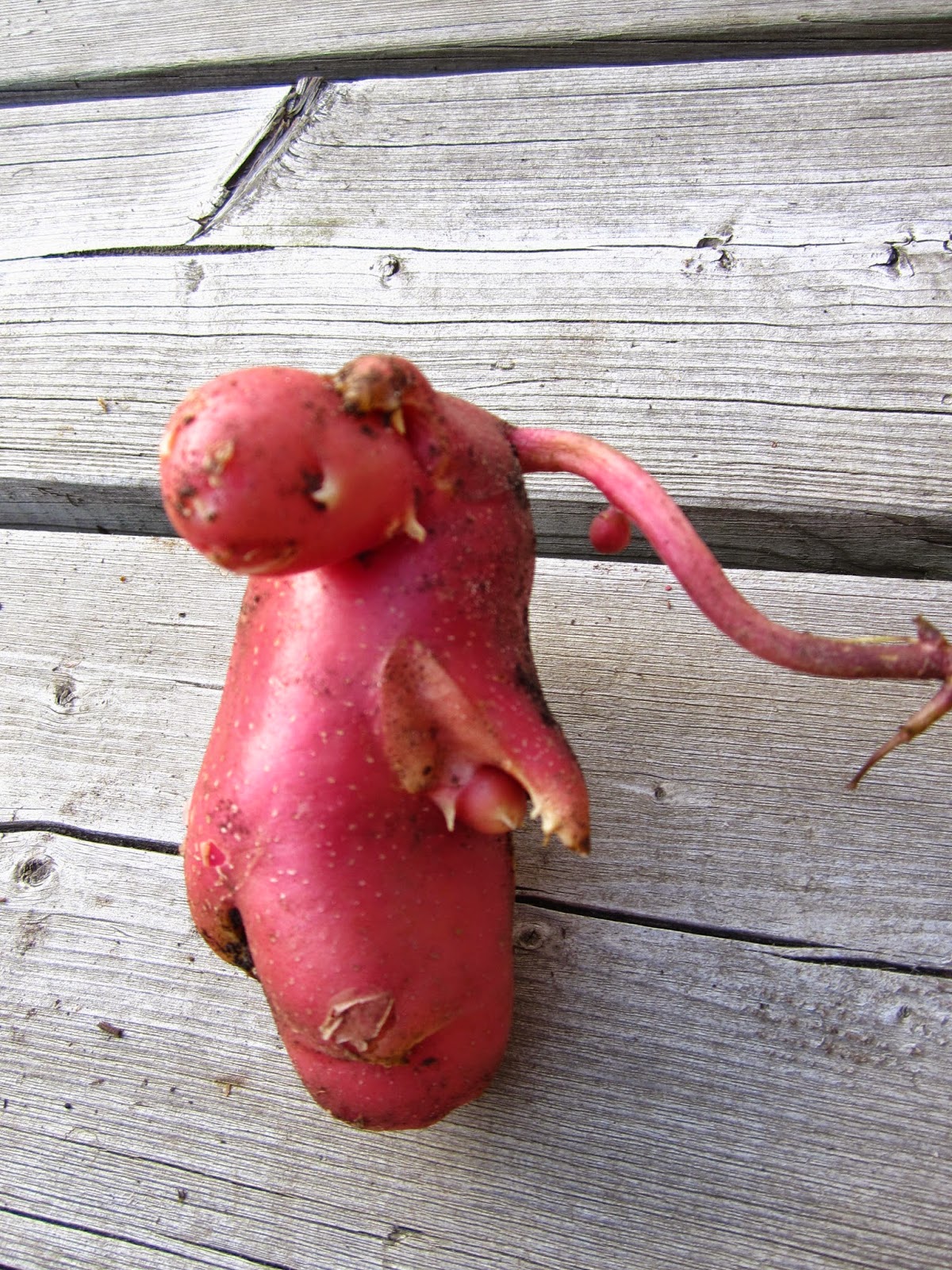 And this one looks like a mole lying on its back - see the "claws": 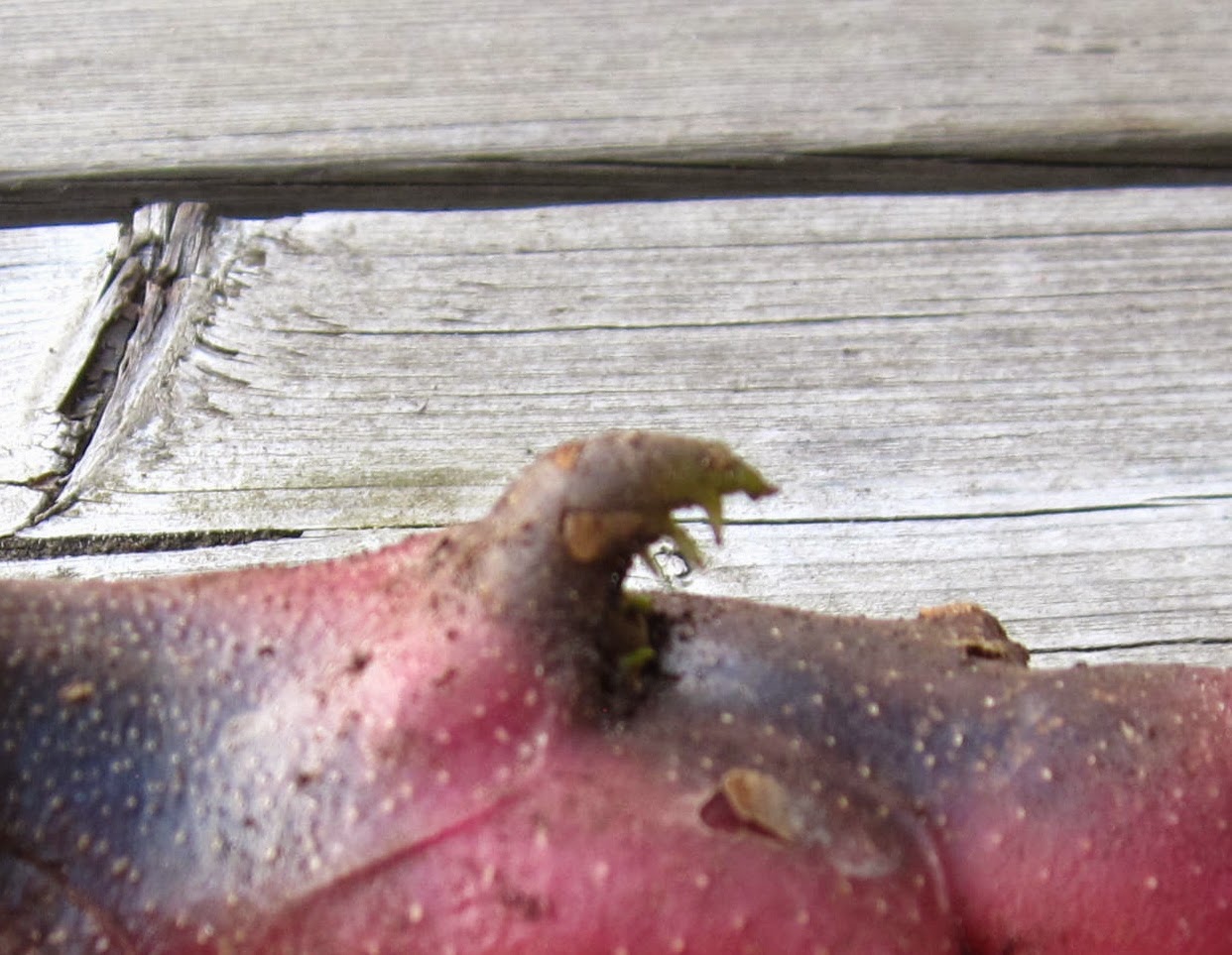 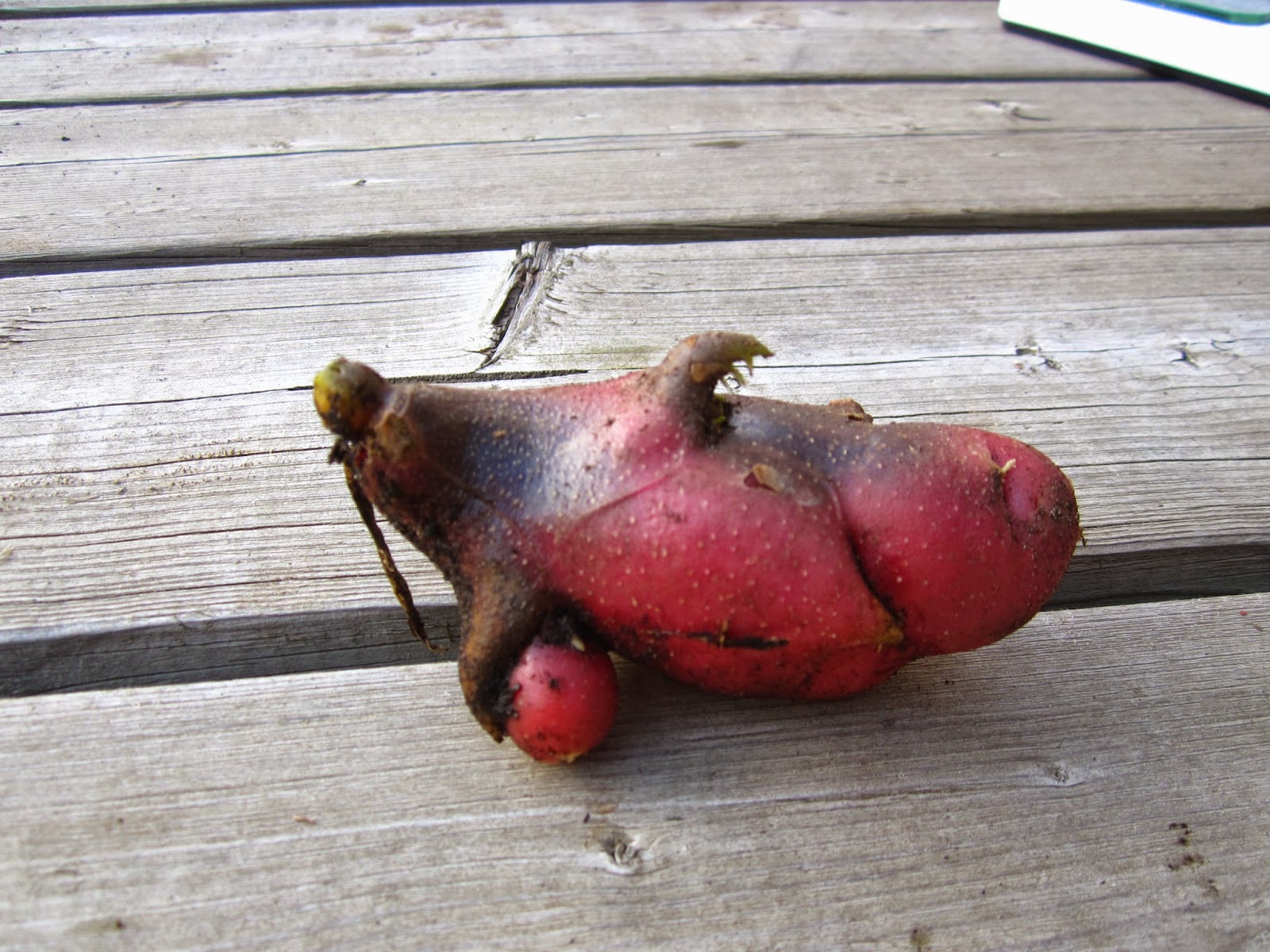 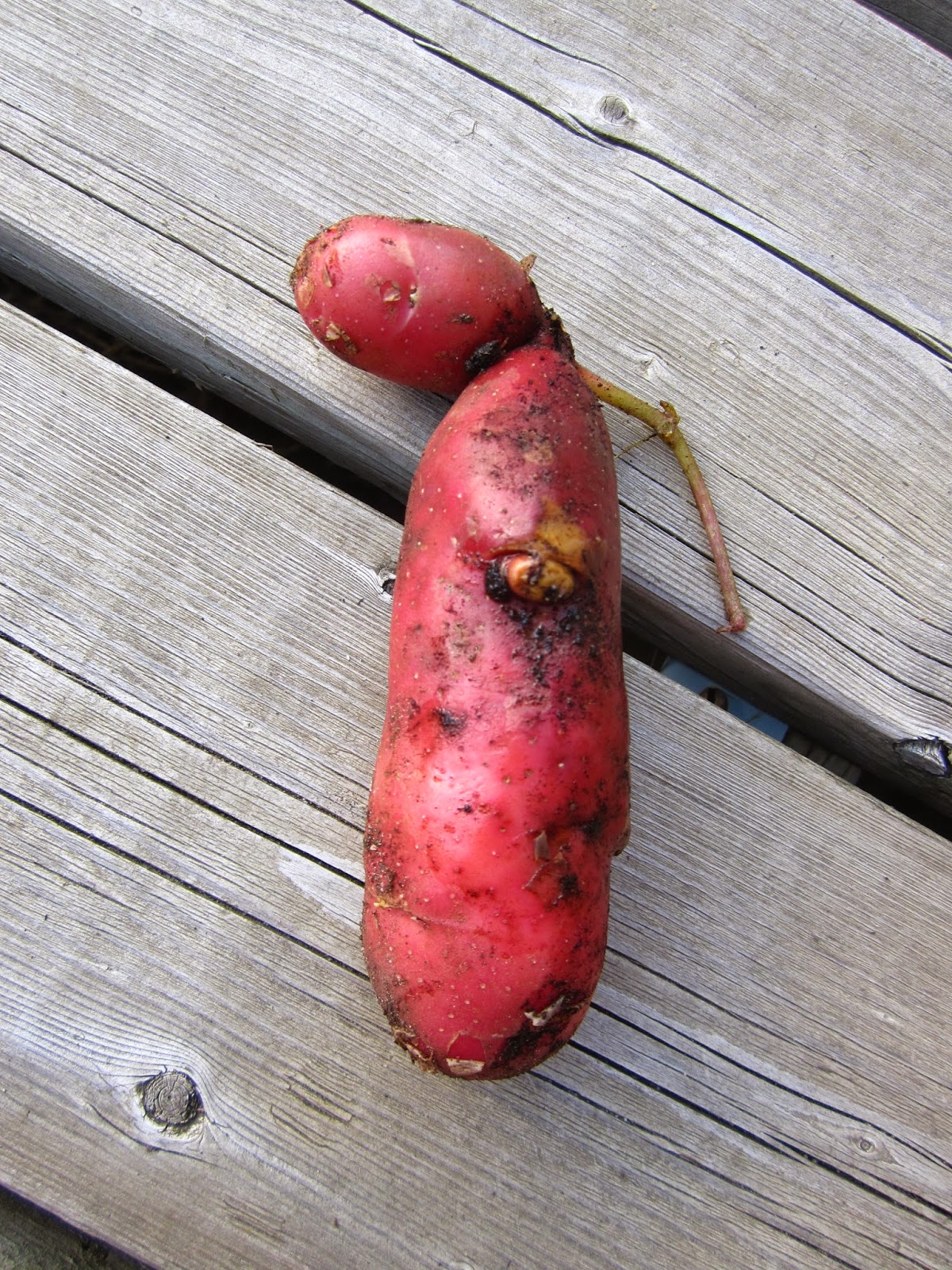 Other than my bean plants which were outright eaten (most likely deer), I did not have any damage similar to the potatoes in any other garden spaces.  Last year, I had grown pumpkins and watermelons in that same spot with no issues.  I was planning to put the garlic in that location in the next month or so but I wonder if I should avoid any plants that grow underground there?  On the other hand, maybe that is the best crop as I had heard of using garlic spray to keep voles and other pests out of the garden.

I won't even pretend that I can get rid of the voles, but any thoughts on what crops they are less likely to get into would be much appreciated so I can figure out what is best to put in that garden space next year (I will be doing some fencing next year but this space isn't a priority).