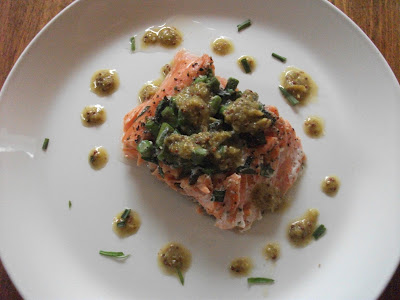 This is a recipe from Michel Richard's cookbook "Happy in the Kitchen" - an amazing cookbook, although some of the recipes get a bit too technical for my liking - notice I did not say they are too technical for my skills; although I consider myself to be a very novice cook, it's important not to limit myself - I believe I can make any recipe that I am interested in, it just might not look as fancy and it might take a really long time! 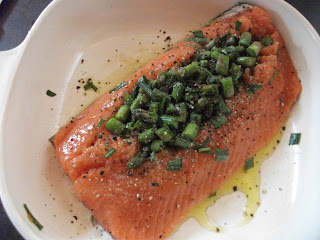 The recipe called for whole asparagus spears to be rolled in chopped tarragon then stuffed into a horizontal pocket made in the salmon. But it isn't that easy to find a salmon fillet that thick (at least in these parts!).  So I chose to chop the mixture and pile it into a vertical slice in the top of the fillet.

For 2-3 people, choose a fillet about 7-8 inches long.  Make a slice in the fillet lengthwise and fill with the following mixture, then season with S&P: 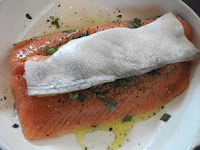 I had an extra skinny piece of flesh that I had cut off the side so I placed it over top to keep in the moisture.


Bake at 325 degrees Fahrenheit for 10-13 minutes, or to your preference (like when the weird white fatty stuff starts showing).  Spoon the asparagus vinaigrette over each serving. 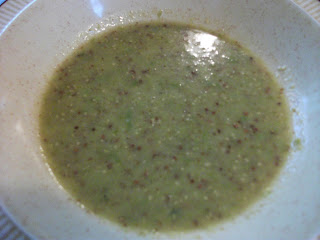 Chop 4 asparagus spears into 1-inch pieces. Place in small saucepan, add 1/4 cup water and 2 Tbsp olive oil and bring to simmer.  Cover and simmer until asparagus is softened and water has evaporated (asparagus will be stewing in the olive oil).  Puree mixture in blender or food processor, then pour into bowl.  Whisk in 1 tsp Dijon mustard and juice of 1 lemon.  Add salt and pepper to taste (Richard's recipe also calls for a pinch of sugar which I did not use).