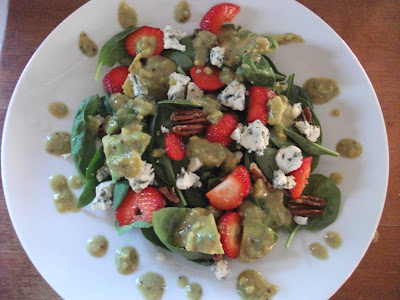 A friend of mine is interested in eating a healthier diet, which is something we can all relate to from some point in our lives.  So she wants to eat avocados for the health benefits (I'm not a nutritionist, but I do know they are darn good for you!).  However, she doesn't like the texture.  Yes, they have a lot of fat, but it's mostly monounsaturated, so the good kind!  And for me, the fat makes them very creamy, but I know not everyone likes that.

Of course, guacamole was my first thought, but then that tasty dip usually gets eaten with some cheesy nachos.  So for something a bit healthier (and I say "a bit healthier"), I wanted to try avocado in a salad dressing. Oooh ... it's delicious, and so was this salad I put it on!  I can't believe I've never made this before.

My strawberry harvest gets bigger every time I pick (which might suggest I should pick them more often), so this basketful of strawberries made me think of having a spinach salad, as they often go together. 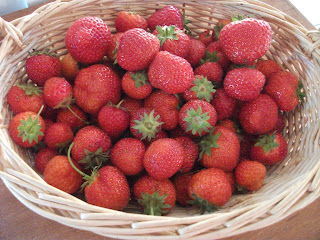 I actually had planned to make this salad for an upcoming potluck we have at work.  But potlucks, especially when you are at work and have to keep the dish by the side of your desk all morning, should be about simplicity - single dish items where possible.  And I just couldn't bring myself to toss all of the ingredients together HOURS before eating.  Besides, this is the kind of salad where everyone should get to decide how much of each ingredient they want.

For that reason, I've offered no amounts here, just pick and choose which ones you like and how much of it works best for your taste.  The dressing recipe is just mashed avocado mixed into my typical vinaigrette - so tangy the way I prefer.  Lots of recipes call for yogurt making a creamy dressing rather than a tart vinaigrette - plenty of options on the internet if you prefer a different style. 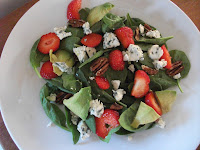 I had forgotten about the bacon on the stove top until I had already finished the salad. Awesome without it, but I suspect equally or more awesome with it.  And I added avocado slices, which of course defeats the purpose of my friends request for avoiding that avocado texture, so easy enough to just leave out.  And there are plenty of other ingredients that could be added in such as finely sliced red onions, sliced mushrooms (I personally hate raw mushrooms but they seem quite common on spinach salads) or cherry tomatoes.

I'll be having another one of these salads very soon.