It is that time when mulching is most appropriate.  Too soon in the season and there is a risk of covering up seeds that have not yet sprouted, or damaging tender seedlings.  But too late and weeds will most certainly over-run the garden.  Now don't get me wrong, there are plenty of weeds already, and particularly so for me as I'm quite lazy in this aspect.

But there are other benefits to mulch other than weed suppression, including holding in moisture, and, depending on the type of mulch, it can also add beneficial nutrients to the soil.

I am experimenting with different options this year, and rarely will one solution suit all.  For example, I am using pine straw around the newly planted blueberry and raspberry bushes as fruit likes acidic soil.  In fact, many plants like acidic soil so my few acres of pine trees offer plentiful mulch for years to come (although it's apparently a myth that pine needles still retain any acidic qualities by the time they dry out). 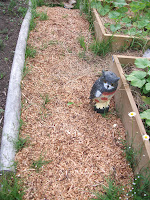 And I was given some wood chips by a friend which I have used between the raised garden beds.  I will need a lot more to cover the areas that I want and am considering renting a wood chipper at some point (this will help to clean up fallen limbs from the winter and I can use wood chip mulch almost anywhere).

Earlier this year, I bought some hay bales for the intent of hay bale gardening.  I knew I wanted to use some as mulch as well, so I bought extra.  Hay (versus straw) can often contain weeds, so it comes at a risk.   But it is cheap (really cheap in my opinion:  see Bargain Gardening Supplies Post) and looks nice.  It also breaks down well over the winter - actually, I have not seen any weeds popping out of the hay as yet (other than the odd fungi), so maybe that becomes more problematic after it breaks down into the soil.

Potatoes get an extra benefit from this mulch - they can actually grow in hay.  The containers in the greenhouse holding potatoes had a layer of hay at the bottom.  The potatoes in the outside garden have hay on top.  It will help to keep the sun away from any potatoes that grow close to the surface.


Another experiment is sheep fleece as mulch.  From what I have read, I understood that sheep wool no longer demands the same premium that it used to, and farmers often have to burn the wool when it can't be sold (it requires a lot of cleaning and preparation to be sold as a fiber for manufacturing clothes).  A friend of mine knows Fred Baker, sheep producer extraordinaire from nearby Mountain, Ontario, so she hooked me up with him to get some wool.  Although it was not free, the price was worth the great dinner and an evening chatting with Fred who seems to know everything about everything (and now I have a great contact for getting some lamb meat). 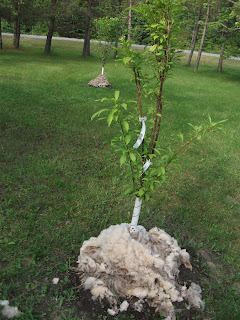 I've used the fleece around the recently planted plum trees.  I had seen this at a friend of my brother's who runs a small sheep farm in Mission BC.  He used old wool around the base of some trees.  I did not ask at the time what it was for, but it seems to me it might help frost conditions over the winter and early spring, and also to keep animals from nibbling on the tender bark of the young trees.

The rest of the fleece went on the newly planted pumpkin/melon patch.  I thought it best to use fleece on vegetables with a thick skin so that it does not stick to the vegetable when harvesting. 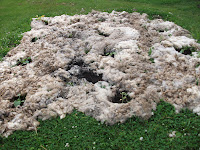 The original pumpkin patch was covered with hay. 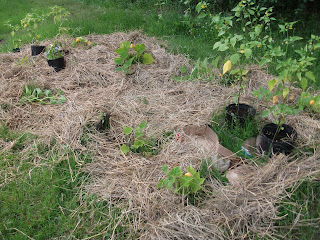 Most mulches behave basically the same, so I suspect it will mainly come down to aesthetics.  I am used to the look of hay, and I think it looks nice once it has been wet down once or twice and settles in.  I am not used to seeing the big white blotch of fleece in the middle of the yard, nor am I used to the mild stench (I have read reports of wool mulch attracting fox - I am more concerned about my neighbour's dog!).

So in the long run, it will simply come down to my own preference, with cost (free?) being most important, and simplicity and looks following close behind. 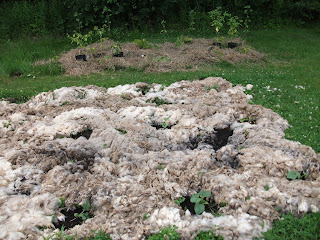