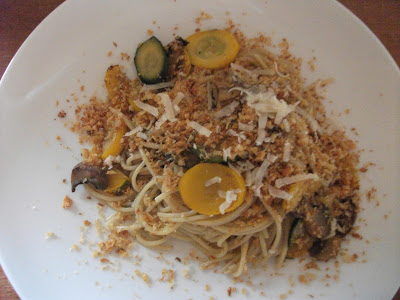 I love growing summer squash as it is a serious ego-booster for gardeners.  Zucchini generally grows fast and furious for even the beginner gardener.  I have about 10 plants on the go from a mystery pack of mixed summer squash seeds.  So far I've seen evidence of green and yellow zucchini, and I also see eight-ball squash, as well as both yellow and green patty pans (these seriously need to be monitored closely).  There are still a few mysteries remaining. 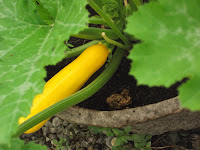 In the meantime, I am so paranoid about getting overrun with zucchini that I'm picking them as "babies".  Very tasty and tender, but I think I'm being a bit silly, and will try to let the next few grow bigger.  Delicious either way, I just don't want them to get too big as the texture becomes a bit woody (dried out) and bitter in flavour.  So I've picked as many teeny-weeny zucchini (nice!) as I could to make this dish. 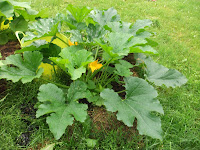 As a side note, it would appear that the hay bale "garden" containing two summer squash plants (one green zucchini, the other eight-ball) is slowly collapsing under the weight.  Assuming I do these again next year, I'll have to be careful about what I plant in the hay bales.


And I have only recently realized the extreme difference between Russian and French Tarragon.  I am growing Russian Tarragon.   French Tarragon has a much stronger anise-flavour which is what I am usually looking for when using this herb.  So I'll be on the lookout for some in the coming weeks.

The addition of the garlic-buttered bread crumbs is more of a luxury than a necessity, but zucchini can get pretty soft (hopefully not mushy) when cooked so it's nice to have a bit of crunch.  This recipe serves 4.

Once the bread crumbs are prepared, start the salted pasta water.  The rest of the ingredients should take about the same time as it takes to cook the pasta.

Heat a large pan and add 2 Tbsp olive oil.  Add mushrooms, stirring only when needed (I'm personally a terrible "stirrer"- but best to leave them alone as much as possible to get nice and brown).  Only add salt after mushrooms have released their water.  Once mushrooms are lightly browned, add zucchini. If you happen to be drinking some white wine, add a splash or two.  Cook until zucchini is softened.

Add garlic and tarragon.  When pasta is ready, quickly add stock or cream to the mushroom/zucchini mixture, then add pasta.  Season to taste - great with lots of pepper.  I used veggie stock just because I was in the mood for something a bit lighter, but cream, as you can well imagine, is another luxury for this dish.

I always use tongs to bring pasta from its pot to the pan so that the pasta water is readily available if additional liquid is required.  Toss ingredients together.  When serving, top with garlic-buttered bread crumbs and parmesan cheese. 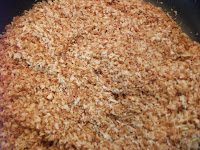 
I always have panko bread crumbs on hand, although it's nice to make your own bread crumbs from dried-out bread.  If using panko, just remember that it is already seasoned and may not require as much salt.

Heat oil and butter in a pan on medium-high heat.  The butter will start to foam; once foam starts to reside, add garlic, then 30 seconds later, add bread crumbs.  Stir until bread crumbs are toasted and golden-brown in colour.  Season to taste, then set aside.

I often make extra bread crumbs as there are so many uses: macaroni and cheese or other pasta dishes, veggie casseroles, shrimp, baked fish .. yummy!