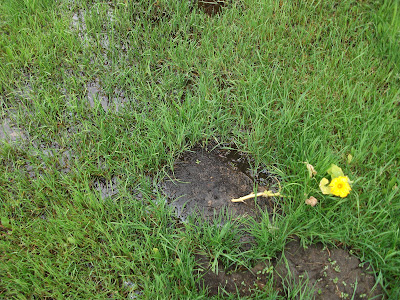 I have finally decided to move the few pumpkins that are too close to the wet zone.  Recent rains have flooded the area again, and I have finally come to the conclusion that it may never dry up. 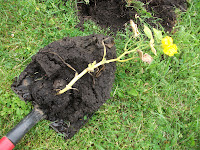 They are likely going to die where they are, so I am taking the chance of transplanting. 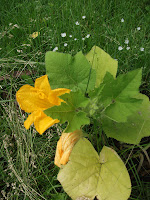 Eight of the twelve seem healthy enough, but I moved four of the Lumina pumpkins to a slightly raised area about eight feet south of the current location.  I was already digging holes for the cantaloupe and watermelon seedlings, so another four was not a big deal. 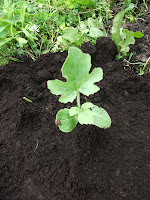 Although I had already planted five watermelon plants inside the log-raised-garden in the greenhouse, I was disappointed with how few seeds had germinated. So I purchased a package of McKenzie watermelon seeds, along with some cantaloupe.  Those watermelon seeds did not have a high germination rate either (will need to research this a bit next year) but I still managed to get another four plants. 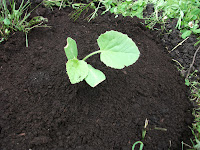 Cantaloupe was slightly better; I have six plants out of ten seeds.  And I also purchased a Muskmelon plant at the local farmer's market.  If I understand correctly, all cantaloupe are muskmelons, but not all muskmelon are cantaloupe?  I guess I'll just wait and see.


But back to the greenhouse ... the original five watermelon (Jade Star Hybrid from William Dam Seeds) are doing well and are started to trail all over the place.  However, I cannot be sure any of the few female flowers have been pollinated.  There have not been a lot of bees in the greenhouse, but then, I have not seen a lot of bees anywhere yet this year.  Let's hope it's just the cool, wet weather, and they'll be coming around soon. 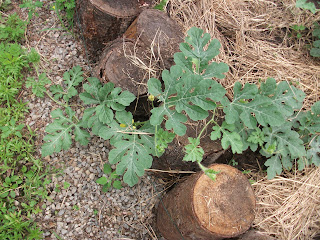 I think this is the same garter snake that was living on the hay bale in the garage and now spends his time in the hay mulch amongst the watermelons.  He has grown a bit, and is starting to get creepy ... 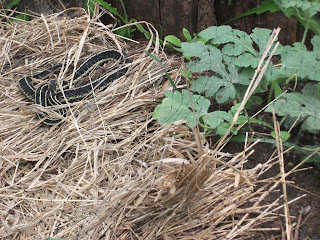 And I finally had the opportunity to manually pollinate the single Sugar Pumpkin I am keeping in the greenhouse.  So many times I have seen the male flower open, but never a female at the same time.  But it happened this morning, and I am pretty sure it worked. You can very easily see the pollen rubbing off the stamen onto the female bits, I just don't know if I got it in the right place?  Geez, sex ed. all over again!

And I made it just in time, as within only a couple of hours, both male and female flowers had completely closed up again. Fingers crossed that it worked! 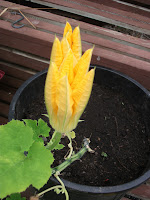 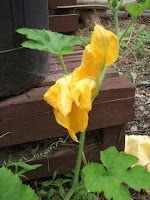 And since I am on the subject of cucurbits, I already have a sturdy looking bush cucumber on the way.  I actually don't know how big they are supposed to get, but it still feels too prickly, so I will leave it a while. 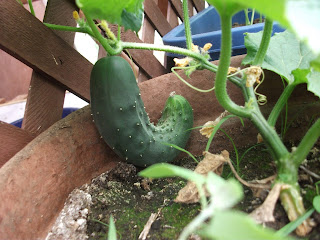