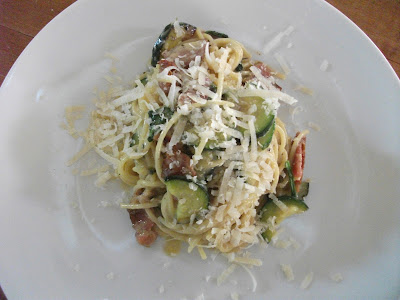 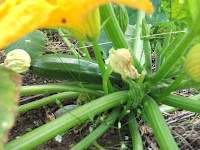 Zucchini can be beautiful, but only early in the season when it has not yet overwhelmed the gardener!  I have been keeping a close eye on this one, my first of the season.  In fact, I was so excited, I picked it so early that I did not even have enough for this recipe.  I am far too aware of how fast zucchini can get out of hand, so I picked it as soon as it looked useable.


I do not normally eat pasta with creamy sauces. They taste great but I often don't feel well afterwards. I would imagine that carbonara is pretty high on the list of "heart attack on a plate" dishes.  With all of Jamie Oliver's attempts to get people to eat healthier, I just assumed that his carbonara recipe would be lighter fare.  Not so.  The addition of zucchini helps ... a bit.  Because I did not have enough zucchini, I also tossed in some baby spinach.

But what made it not so heavy eating this time around is a simple mistake I made while preparing the recipe.  I was particularly inattentive when I made this and rather than using egg yolks only, I used whole eggs.  After tossing the pasta together, I was surprised at the amount of sauce ... I thought, my god, how gluttonous, there is enough sauce here for twice as many servings! 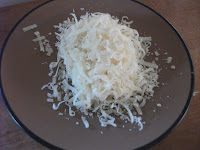 As a result of my error, I discovered a recipe that makes a lighter than usual carbonara dish, but still delicious.  By halving the amount of cream and cheese and using the whole egg instead of just the yolks, you end up with about the same amount of sauce, but much lighter.  I also reduced the amount of bacon from 3 slices per serving to 2.  But one minor note on the cheese ... when Jamie Oliver's recipe refers to a "handful" of parmesan, I chose to assume he meant a manhand-ful. :)

This is based on the recipe from the Jamie At Home cookbook and should be enough for two large servings, or three for us regular folks.


In a bowl, mix together the two eggs, cream and half the parmesan cheese.

In a large frying pan (you will eventually toss all of the pasta in this pan), fry the bacon until crisp.  Add zucchini and fry until browned.  Season with some salt to taste, and lots of cracked black pepper.  Add thyme and stir.

Timing is of the essence at this point.  When the pasta is ready, use tongs to add it to the frying pan, along with a bit of the cooking water (if you use tongs, that means you don't have to drain the pasta, and keep the cooking water in the pot in case more is needed).  Give it a quick mix, then REMOVE FROM HEAT. 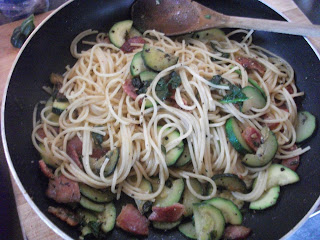 Now pour in the egg mixture and quickly toss to avoid scrambling the eggs.  Sprinkle in the rest of the parmesan and add more cooking water if you want a thinner consistency.  Adjust seasoning and serve while it's hot!

And a final note on thyme.  Remember when I complained about growing rosemary (Growing Herbs From Seed ... Not)?  Same issue with the thyme.  The thyme on the left was purchased for $2, and the thyme on the right was painstakingly grown from seed in February.  Ugh! 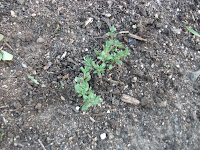 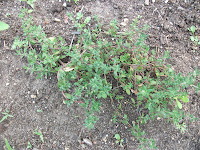