Rhubarb Chutney (and why I change other people's recipes) 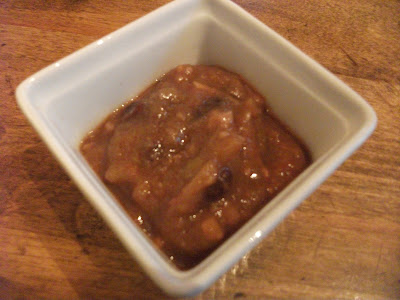 Friends have come to the rescue and very generously provided me with a big bag of rhubarb (and some rhubarb crowns to plant as well)!  I made this chutney recipe a couple of years ago and really enjoyed it, so have been wanting to try it again.  I found the recipe on Allrecipes.com - I really like recipe websites where people can rate the content.  I have never rated anything myself (I depend on others to do what I can't be bothered with), but I like the idea of relying on a recipe with 1200 ratings at 5 stars.  How can that many people be wrong??

The recipe I am referring to has not quite made it to that level, but still has a respectable 4.5 stars after 50 reviews.  The title (and here's the link) is Bifana - it seems to refer to the whole dish which includes this rhubarb chutney being served with a pork tenderloin.  My focus was just the chutney as I had other plans for it ... this picture isn't that great, but I was in too much of a hurry to eat it (described in detail at bottom of post): 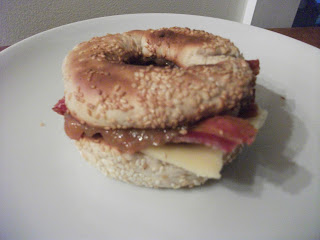 When I make a recipe, I do not generally intend to deviate.  Sometimes there are obvious substitutions required - I never use margarine and will always substitute butter (or maybe lard or shortening depending on the recipe).  Often, as in this case, it is simply a matter of not having the right ingredient on hand, or avoiding an ingredient I don't like.  And when I change one ingredient, I don't always adjust others; I consider the impact on my personal tastes and maybe it isn't necessary.

Needless to say, I had every intention of following this recipe as written, but ended up making more adjustments than I thought.  I'm sure the original recipe is great, but I've never tried it so can't comment one way or the other.  Here is my version (along with some commentary on why the changes were made): 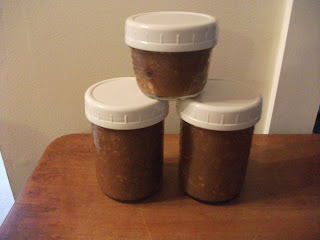 A toasted Kettleman's Montreal-style bagel (oh, they look so good coming straight out of the oven, and then they smell so good in the car driving home!!)
Bacon (I found someone I knew at a local farmer's market last weekend who raises their own pigs and picked some up)
Havarti Cheese (no butter required on the bagel; havarti is buttery and creamy all on its own)
Rhubarb Chutney 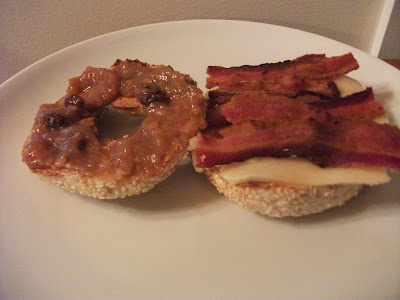