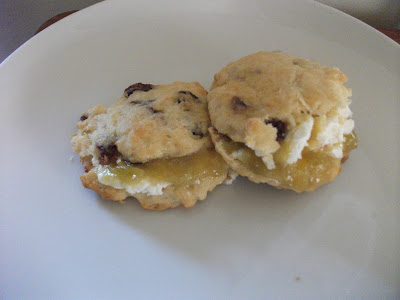 I have been trying to make a dessert with this combination for the past few days.  I made a sweetened cheese mixture of 2 parts mascarpone, 1 part sour cream, and enough sugar to sweeten it.  I knew it would taste great with the ginger rhubarb jam I had recently made, but could not seem to find the right way to serve it.

First, I tried baking the combo in a dumpling wrapper.  In the past, I have baked wanton wrappers (spray with a cooking oil then place in muffin tins) and filled them with roasted pepper and goat cheese mousse.  I was hoping the dumpling wrappers would be similar - I've used them like pasta dough to make ravioli, but had not actually baked them.  I wasn't thrilled with the result, the dumpling dough was crunchy on the edges, and chewy around the filling, but wasn't very pleasant. 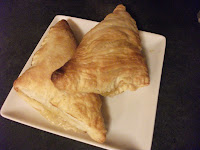 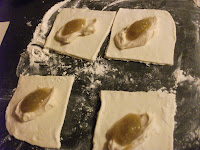 So next I tried making "turnovers" (a.k.a. popovers) with puff pastry.  I neglected to seal the edges properly and a good portion of the filling leaked out.  I still think it was the right idea, I just did not execute it very well.

I'm still trying to decide if I should bring them to work for my colleagues to nibble on and maybe they just won't notice?!).

Tonight was all about leftovers ... I was finally able to really enjoy the flavours together on one of my Lemon Cranberry Scones that I pulled out of the freezer.  I spread plain mascarpone cheese (without the sour cream and sugar!) on the oven-warmed scones, then a layer of the ginger rhubarb jam.  Oh so good!!

I also had picked up some corn on the way home and ate it with the leftover Miso Butter from last week.  The miso butter was a great idea, but I don't know what I was thinking buying corn at this time of the year.  The ONLY time I ever really enjoy corn is when it is eaten the same day it is harvested.  So I wait until the roadside stands pop up all over the place trying to sell off their harvests each day.  According to the many educated folks on the world-wide web, as soon as corn is picked, the sugars begin to turn to starch - best to eat it as soon as you can after it's picked!

Oh yeah, and speaking of leftovers, the lemon custard sauce that I served with the Apple Cinnamon Bread Pudding was delicious with sliced plums!

And a short aside ... I found this in my garage a few days ago; it (he/she?? I don't think that is relevant for snakes) has taken up residence it seems.  Looks like a regular old garter snake to me.  I don't mind snakes; not so the case with spiders, however, as I have a minor phobia.  After spending so much time in the country, I have become used to regular spiders and although I don't like them too close to me, I will let them be as I know they eat insects and are generally good for the gardens.  But when I see a real creepy-crawly with a hairy body or something, I'm forced to kill it anyway I can (usually by throwing a shoe at it from a large distance) - otherwise, I'll have nightmares that it is slowly creeping up on me.   Aaaaaahhhhhh! 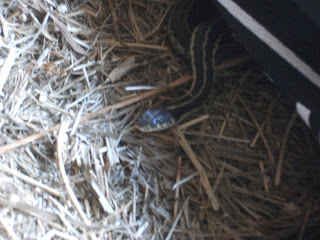 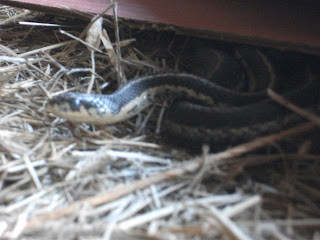