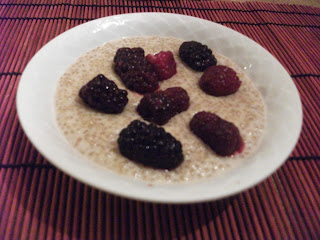 When I left work today, I officially kicked off a week of holidays.  What should have been a happy event started off a bit sour.  Not only was the weather very cool for this time of year, but it has been raining off and on for days, and today was no exception.  My day was not improved when I arrived home to find that the hydro company had mistakenly disconnected electricity at my home!  It took a few hours to remedy the situation, but not so my mood.

So-called "comfort foods" may not be great for the waist, but they certainly have their benefits.  Nigella Lawson describes it so well in her intro to the "comfort food" section of her cookbook "Nigella Bites":  We all get tired, stressed, sad or lonely, and this is the food that soothes".

I currently have a bit of an obsession with a Romanian food blog called "Lemon Love Notes".  I first found it when needing inspiration for my recent labneh recipe:  Lemon Blueberry Labneh Ice Cream.  But I immediately took note of a quinoa pudding recipe, Q for Quinoa.  I have been interested in trying this recipe, or something similar and tonight was the night!

So inspired by Lemon Love Notes, but also by Nigella Lawson's "Stovetop Rice Pudding for Emergencies" recipe, I set about making my own version of a quinoa pudding.

In the mode of Nigella's rice pudding recipe, I have also used the "risotto" method of cooking but with quinoa as the main ingredient. 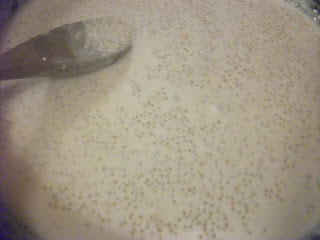 In a large shallow pan, add 1 Tbsp butter and 3 Tbsp maple syrup.  Bring to a boil and allow to bubble up for a minute or two.  Add 3/4 cup quinoa.  Stir and the quinoa should immediately soak up the syrup.  Start to slowly add the heated cream mixture about a 1/4 cup at a time.  Keep the quinoa at a medium heat to quickly soak up each measure of cream and stir regularly.  When the quinoa begins to soften, turn down to a simmer and continue the process.  Add a pinch of salt.


Continue cooking until it reaches your desired consistency.  Add more cream if required.  I left mine "al dente" - almost like a tapioca pudding with a bit of a bite rather than a super creamy rice pudding.  But to be honest, I left it sitting on the stove and had another bowl after it continued soaking up the cream and it was much creamier and equally delicious!

Serve with berries, a touch of cream or on its own. 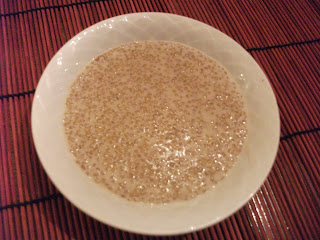